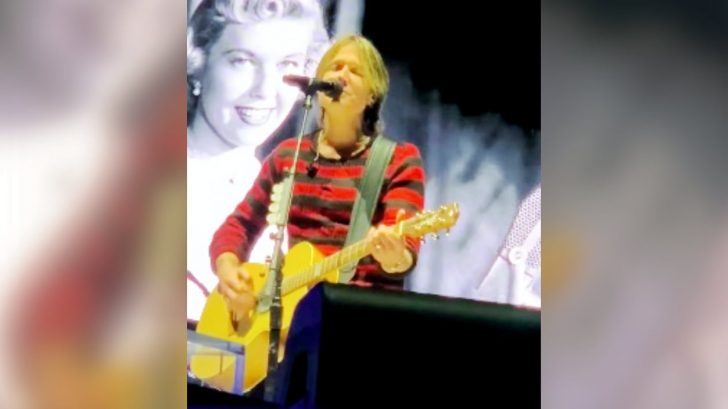 For several years now, Keith Urban has helped Nashville ring in the New Year by performing a free concert on New Year’s Eve. His performances often feature surprise collaborations with special guests, and 2019 was no exception.

During the concert, Urban thrilled fans by singing Wynonna Judd‘s “No One Else on Earth” with Ashley McBryde. He also invited Stevie Nicks on stage for a lively performance of her hit song with Tom Petty, “Stop Draggin’ My Heart Around.”

2019 wasn’t the first year Urban sang one of Petty’s songs during his NYE celebration. In 2017, he sang a rendition of “Free Fallin'” while his wife, Nicole Kidman, and their daughters danced on stage.

The performance was part of Urban’s “in memoriam” medley he sings every NYE. During the medley, Urban sings pieces of songs belonging to artists who passed away in a given year.

He sang “Free Fallin'” to honor Petty in 2017, since he passed away in October of that year. He also performed songs in honor of Don Williams, Glen Campbell, and Troy Gentry.

The 2017 performance remains his most-viewed NYE memoriam medley, with over 1.1 million views on YouTube.

Urban delivered another powerful tribute medley in 2019. He honored a number of artists, including Doris Day, Eddie Money, “Captain” Daryl Dragon, Marie Fredriksson of Roxette, James Ingram, Peter Tork of the Monkees, Ginger Baker of Cream, and Ric Ocasek of the Cars.

He also took the time to honor his late friend and collaborator busbee, who passed away in September following a battle with brain cancer. Busbee was a songwriter and producer who worked with many country stars, including Maren Morris, Carly Pearce, Blake Shelton, and Urban.

My brother Michael… You brought love and light and music that will live on and travel the world – i feel deeply grateful that our lives came together-and I send prayers of gratitude and peace and love to your spirit – and to your beautiful family. – KU

Other songs Urban performed throughout the medley were “Love Will Keep Us Together,” “Que Sera, Sera,” “I’m a Believer,” and “Two Tickets to Paradise,” just to name a few.

You can watch a fan-filmed vide of Urban’s entire 2019 memoriam medley below.

All of the artists he honored are so dearly missed. Their legacies will live on through tribute performances like this.