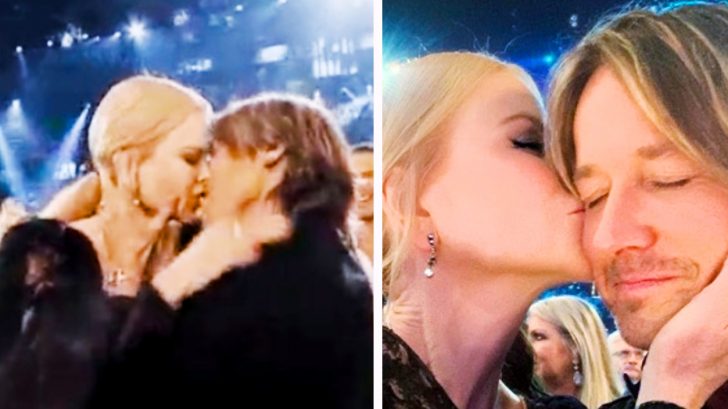 Keith Urban and Nicole Kidman make heads turn whenever they walked the red carpet together. And not just because of what they’re wearing or how good they look…but because of how they treat each other.

Fans fawn over the couple’s romantic gestures, often commenting on how smitten they seem with each other even after nearly 13 years of marriage.

Those romantic gestures were in abundance at the 2019 ACM Awards on Sunday night (April 7), which Urban and Kidman attended together. The two were seen getting close and cozy on the ACM Awards‘ red carpet, where they posed for a series of loving photographs.

The pair also filled their respective social media accounts with photos taken throughout the night. Within an hour of each other, they each shared a selfie taken from their spot in the crowd, with Kidman’s being taken after Urban’s emotional performance of the song “Burden.”

Urban’s photo shows him looking lovingly into Kidman’s eyes, while the photo Kidman shared shows the actress planting a kiss on her husband’s cheek while he appears to be in a state of total bliss.

Just listened to his song Burden at the #ACMAwards….. looooooooove ❤️

But that wasn’t the only smooch the couple shared from the ACM Awards audience!

Packing On The PDA

At the end of the ceremony, Urban became the night’s big winner when he was named the 2019 Entertainer of the Year. This is Urban’s second EOTY win in a year’s time, since he won the same award at the CMA Awards in November.

Before taking to the stage, Urban walked around the crowd to hug his fellow nominees: Jason Aldean, Chris Stapleton, and Luke Bryan. But the first person he embraced was Kidman, and in doing so he went in for a passionate kiss in celebration.

Keith Urban and Nicole Kidman making out after his #ACMawards win looks like a scene from a movie. ? pic.twitter.com/UJxr1AuJJf

I thought Keith Urban and Nicole Kidman were going to have a make out session for a second there lol Congrats, Keith Urban on being Entertainer of the Year! https://t.co/s4EK6OQy3y

Urban’s display of affection didn’t end there. Once he finally made his way to the stage he made sure to thank Kidman in his speech, calling her his “baby girl.” Kidman watched with awe from the audience, appearing completely enchanted by her husband.

Later on in the night, Kidman shared another affectionate photo with Urban on social media. The picture shows the two of them snuggled up to each other after the ceremony as they celebrated his big win.

The night is just beginning!! Celebrating entertainer of the year at the #ACMAwards! THANK YOU EVERYONE! ??

There is so much love and joy in that photo!

It makes our hearts melt to see how much Urban and Kidman care for each other. If you’d like to make your own heart melt, tune in to the video below to watch Urban’s EOTY acceptance speech, in which he passionately thanks Kidman for all she does.

A huge congratulations to Urban and Kidman following the ACM Awards…we hope they enjoy their celebration!