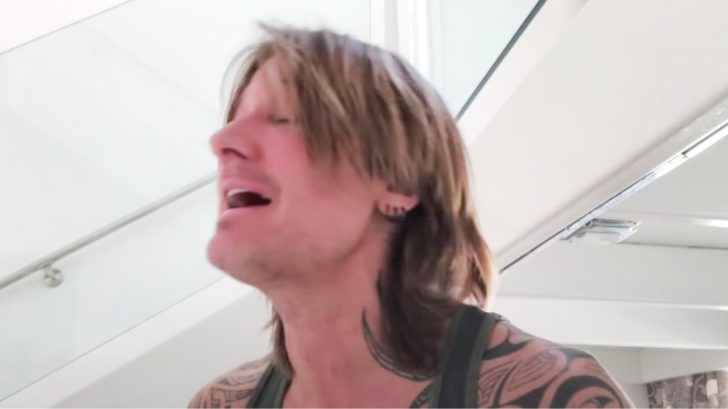 A Big Buildup To New Song

For a while in early 2018, Keith Urban had been hinting that he was going to reveal some big news. He at least made it obvious that he was planning to release a new song, which he revealed to be titled “Parallel Line.”

Fans got the chance to hear that song for the first time when Urban performed it during a surprise pop-up show in Nashville in January 2018. It was also during that show that Urban revealed his intentions to embark on a tour that year, called the Graffiti U World Tour.

As if all of that wasn’t exciting enough, back at the pop-up show Urban also shared his plans to release a new album, also be titled Graffiti U. That album was released in April 2018, and “Parallel Line” is on it.

Fans finally got the first chance to hear the recorded version of “Parallel Line” in full when Urban released it a little later in January. It was released as a single in Australia only, but is still available on a worldwide scale.

According to radio.com, English singer-songwriter Ed Sheeran served as one of the many co-writers on the track. Sheeran has penned songs for a number of country artists in the past, including Taylor Swift, Tim McGraw, and Faith Hill.

In a statement, Urban said that he loved the song as soon as he heard it:

“It just struck me as one of those kinds of songs that comes along very, very rarely,” he said. “I grabbed my guitar, started playing it and it just fit. It felt so right for me and I was just anxious to get in the studio and get to work on it.”

Song’s Style May Remind You Of Something

“Parallel Line” is a bonafide love song, in which Urban expresses his readiness to move forward with a new partner. He sings about closing the gap between the two of them, declaring how he’s ready to give their love his all:

He truly lays his heart on the line as he sings, “Take a little bit of my heart tonight. No, I literally don’t mind. Just please don’t misplace it.”

Urban has been experimenting with his style quite a bit in recent years, especially on his previous release, Ripcord. One of the standout tracks on that record was “Blue Ain’t Your Color,” which took on a jazzy, bluesy tone.

If you liked “Blue Ain’t Your Color,” then “Parallel Line” is sure to be your cup of tea as well. It has a hint of a bluesy vibe to it too, but is probably more soulful than anything. We enjoy listening to Urban change up his style on songs like this. Once you hear the song, we bet you’ll echo our thoughts.

Go ahead and tune in to the clips below to listen to Urban’s song, “Parallel Line.” It’s sure to make you fall in love with him all over again!