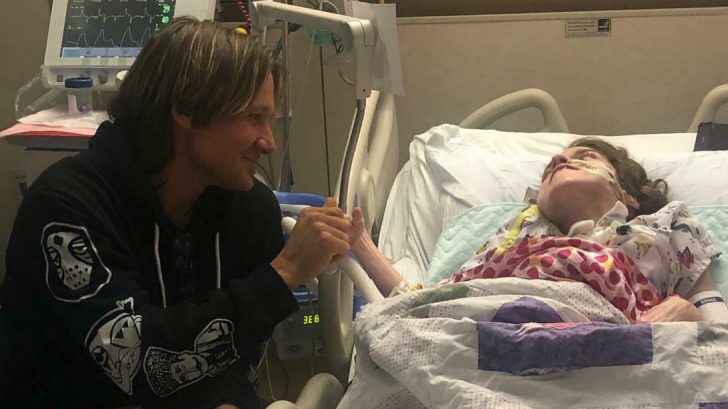 Keith Urban made a fan’s dream come true after she was unable to attend his concert in Toledo, Ohio, In October 2018.

According to WTOL, Marissa English is 25-years old and was born with “a myriad of health conditions including water and an inoperable cyst on her brain, severe scoliosis and cerebral palsy.” She has been a patient at Mercy Health St. Vincent Medical Center in Toledo, and according to those who know her best, she is Keith Urban’s number 1 fan. So, a group of nurses joined forces to start a social media campaign on Marissa’s behalf in hopes that the message would reach Urban before he arrived in the city for his tour stop.

@KeithUrban @mercy_health Keith will be in Toledo for a concert tomorrow (10/18). His “number 1 fan” is a patient here at St. Vs in Toledo! She had tix for the concert but is now facing hospice. Trying to reach out to see if Keith can possibly give this young girl her dying wish

Marissa’s dying wish did indeed make its way to Urban who made a special trip to Mercy Children’s Hospital to spend some time with her. A touching video posted to Facebook shows Urban singing “Blue Ain’t Your Color,” Marissa’s favorite song, as he tenderly holds her hand. She smiles and mouths the words as Keith sings.

Keith also took time to pose for photos with Marissa and the compassion in his eyes and the joy in Marissa’s face are sure to bring you to tears.

Marissa’s family took to social media to share how much the meeting meant to them and to Marissa. “Keith Urban, you are such a class act and we could never express how much this meant to us,” Marissa’s sister wrote on Instagram. She added in the comments that “The entire time he was so into her and I bawled like a baby.”

Not only did Keith Urban visit Marissa in the hospital, he told the sold-out Huntington Center crowd about meeting his No. 1 fan and dedicated the entire show to her.

“I got to meet a beautiful girl named Marissa who I truly think is my biggest fan,” Urban told the audience. “Her family is here and so are some of her pediatric ICU nurses. We’re going to dedicate this whole show tonight to her, to Marissa.”

We think you’ll agree that Keith Urban has a heart of gold and we are thrilled that he made Marissa’s dream come true.