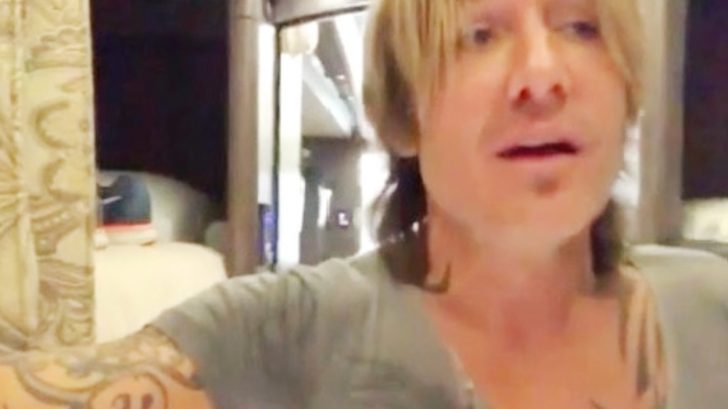 Keith Urban was in the thick of his Graffiti U World Tour around his birthday in 2018, and performed at the Giant Center in Pennsylvania the night before his big day.

The Graffiti U World Tour was one of the biggest tours in country music that year. It started on June 5, taking Urban to cities all over the country.

Unlike most tours, which wrap up before the end of the year, Urban’s Graffiti U World Tour continued well into 2019. The tour took him overseas to the UK, Ireland, and his home country of Australia.

JUST ANNOUNCED: Keith is bringing his #GraffitiUWorldTour to Australia with special guest @juliamichaels! ?? DATES & ON SALE INFO: link in bio!

A Surprise Was Waiting For Him

He took his birthday off, but had a performance set for the following day and the day after.

Because of the tour, Urban’s band and crew knew he wouldn’t have much time for a huge celebration. So they decided to bring the party to him!

A picture Urban posted on Instagram shows his tour bus filled to the brim with balloons matching the Graffiti U colors of black, white and red. Several balloons were hanging from the ceiling, while the rest covered the floor and furniture.

There were so many balloons that Urban could hardly walk through them. “When you can’t even get on your own bus cause your road family is SOOOOOO awesome !!!!!!!‬” he wrote.

Urban was clearly stunned by the surprise, and wanted his band and crew to know how much he appreciated it.

Often, Urban will share a short video after a concert to reflect on the experience and thank fans for coming. He did that from his balloon-filled tour bus, thanking everyone at that concert for singing him “Happy Birthday” and surrounding him with love.

The video gives you an even better idea of just how many balloons were on that bus!

An Even Bigger Surprise From The Past

Filling the bus with balloons may have been a simple gesture in the minds of Urban’s band and crew, but it clearly meant a lot to him. He’s sure to remember this birthday for a long time to come!

Of course, likely no surprise could outdo the one Urban experienced in 2012. While performing at the Country Music Hall of Fame’s 3rd Annual All For The Hall, he was left speechless when Vince Gill, Rascal Flatts, and Diamond Rio invited him to join the Grand Ole Opry.

You can relive that priceless moment by tuning in to the clip below. He was so surprised!