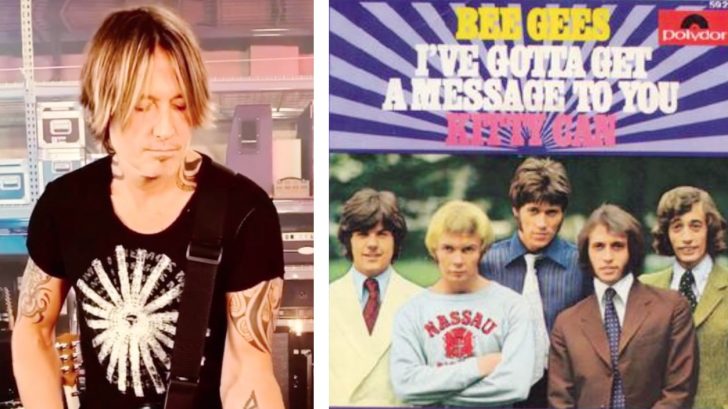 Barry Gibb, the last surviving member of the Bee Gees, teamed up with some popular country and Americana stars to reinvent the music he and his late brothers made together. On January 8, 2021, he released these reimagined songs on his album, Greenfields: The Gibb Brothers Songbook, Vol. 1.

Artists such as Miranda Lambert, Jason Isbell, and Alison Krauss contributed to the record. Barry’s longtime friend, Dolly Parton, also joined him to record a reworked version of the Bee Gees’ “Words.”

Their collaboration marked the first time they’d seen each other since Dolly recorded “Islands in the Stream” with Kenny Rogers in 1983. The Bee Gees wrote that song.

Another artist who lent his voice to Barry’s Greenfields record was Keith Urban.

When speaking with Billboard, Barry said he and Keith share a special connection. Keith grew up not far from where Barry and his family lived in Australia for a time.

“Keith grew up about a hundred miles from where I grew up in Australia. He’s fantastic,” Barry said.

Barry went on to describe how Keith brought his wife, actress Nicole Kidman, when he came in to the studio.

“I mean, he gave us a great gift because he brought Nicole [Kidman] with him, and that was such a thrill. I’m freaking out, you know,” Barry said.

Keith seemed like a fitting person to have on the record, since he famously sang the Bee Gees’ “To Love Somebody” during the Stayin’ Alive: A Grammy Salute to the Music of the Bee Gees special in 2017.

But Keith didn’t record “To Love Somebody” with Barry for Greenfields. Instead, the duo teamed up to remake the Bee Gee’s megahit from 1968, “I’ve Gotta Get a Message to You.”

The song was a stepping stone in the Bee Gees’ career, as it was their second #1 song in the UK and their first Top Ten hit in the U.S.

Now, the song has been reworked as a duet between Keith and Barry. When Greenfields dropped on January 8th Barry also released a “visualizer” video that contains their full recording.

Keith starts off singing by himself, and holds his own quite well! Barry jumps in and takes the reins a little later in the song, and sounds just as good as ever.

Listen to the pair’s collaboration by tuning in to the video below. We bet Keith feels lucky he was able to remake this important piece of music history with one of the men who brought it to life!