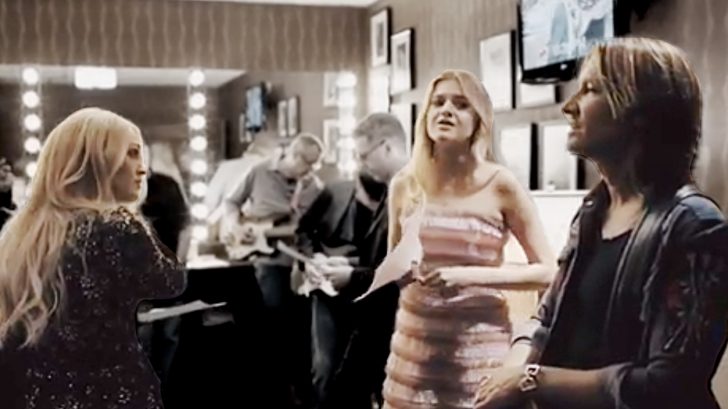 Just a few hundred feet from the famous Opry stage, country music superstars Keith Urban and Carrie Underwood reunited again in song during a rare acoustic jam session that took place in one of the Opry’s historic dressing rooms.

Both stars were there in celebration of the induction for the Grand Ole Opry’s latest member: Kelsea Ballerini.

Both Urban and Underwood have been inducted as members into the Grand Ole Opry, Underwood in 2008 and Urban in 2012. So, their support to their colleague and former tour partner meant everything to her.

Taking to the stage, Ballerini shared her heartfelt gratitude and thanks for what will truly be one of the most special moments in her entire life as a musician. She was inducted by the one and only Carrie Underwood – who also happened to be one of her biggest inspirations growing up.

It's OFFICIAL! The newest member of the Grand Ole #Opry is @KelseaBallerini, with an induction by @carrieunderwood! pic.twitter.com/5sf5vAHzJn

But before the night’s big event kicked off and well before she and Underwood took to the stage to perform together, Ballerini, Underwood, and Keith Urban shared in a very special moment backstage – that they never showed you on TV.

Keith, with his guitar and these two talented blonde beauties all joined forces for an acoustic jam of Trisha Yearwood’s classic hit, “Walkaway Joe.”

They each sang in harmony with each other, sweetly touching the notes to the chorus of Yearwood’s 1992 superhit. As they continued on, they grew slightly louder as the song built more and they connected in unison on every word.

It’s an amazing sight to see – and luckily, one of Kelsea’s team was backstage with them to record the whole thing!

Check out the full clip of their sweet and touching backstage moment below.

sometimes the most unforgettable moments are the unplanned ones. like this. backstage at the Opry with two of my heroes singing one of my all time favorite songs. What a life. @carrieunderwood @keithurban @trishayearwood