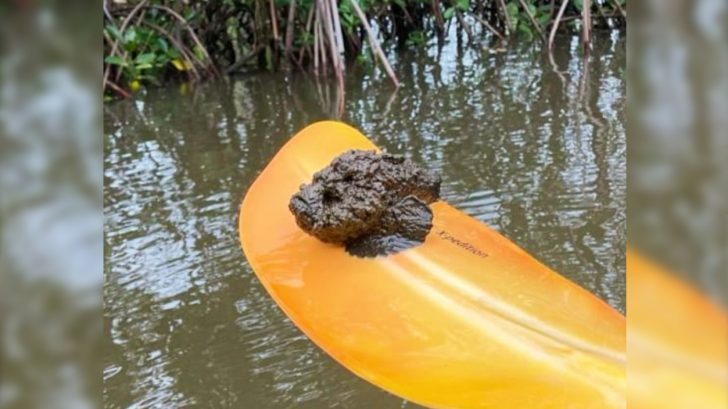 Jennifer Taylor was kayaking with her partner and friend on Saturday when a highly venomous stonefish latched onto their paddle.

Jennifer shared a photo of the fish to the Australian Native Animals Facebook group saying, “Unfortunately, I didn’t get to see it but my partner and friend saw their first wild stone fish today! Near Townsville.”

The unique-looking sea creature was happily perched on the end of the paddle as if it didn’t seem to mind that it was being picked up. The post got hundreds of comments and people sharing their own photos of the fish.

The scientific name for the fish stonefish is called the Synanceia fish. They are normally found in coastal regions of the Indo-Pacific oceans and are the most venomous fish known to man. They have 13 spikes on their dorsal fin that injects venom into a victim when touched.

“Had a friend step on one these ugly things about 20 years ago – they were in hospital for three months, nearly died twice,” one person commented on the post.

In addition to being one of the deadliest fish on the planet, another characteristic that people often point out is that it looks like a little pile of poop. Folks in the comments had some fun with this little observation.

“Thought something took a crap on their paddle,” one woman wrote.

Another added: “I thought you must have been up s*** creek but with a paddle.”

Some even joked about the looks of the fish saying, “Plenty more fish in the sea they said…you’ll have fun they said.”

Another said: “That’s got a face only a mother could love.”

Watch A Video About Catching A Stonefish Below