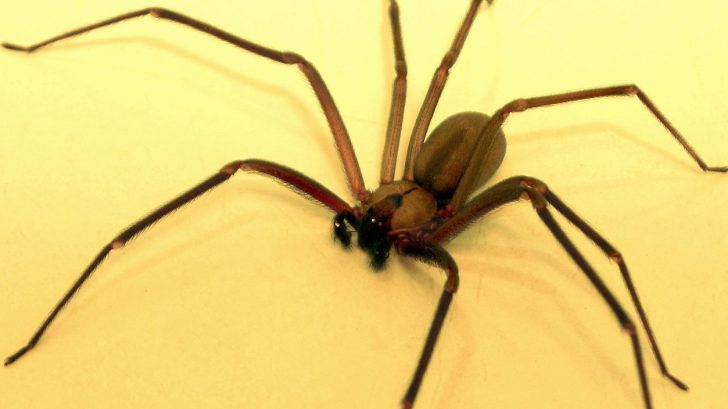 Sherri Maddox from Campbell County, Virginia ended up in the hospital with a swollen lip after she was bitten by a brown recluse spider while kayaking.

Sherri said she was floating on the Staunton River from the Long Island area to the Brookneal area stopping to take breaks along the way. She said the spider bit her sometime during the 10-hour kayaking trip.

At first, she didn’t think very much of it, but after the swelling and the pain continued on to the next day, she decided to take a trip to the hospital where they gave her antibiotics. She said she still wasn’t too worried about it until things started to get worse.

“I cried. It was terrible. I thought I was going to die, you know, it was a lot of pain.” Sherri told KOIN. “I’m almost 50, and I’ve been floating in the Staunton River since I could swim, 6 years old. I was just praying I wasn’t going to die because I hear horror stories and you look on the internet and see all this stuff.”

Doctors at the hospital finally pinpointed that it was a brown recluse spider bite on her lip and acted fast. Lynchburg General Hospital where she was at was full and so they sent her to Bedford where the doctors and nurses worked together to heal her.

“I hallucinated a lot and thought it was because of the pain meds they gave me, but I heard from several different people that that’s what the spider venom does,” Sherri said.

She said she stayed in the hospital for five days hallucinating.

“I just thought I was at my mom’s house or my sister’s house and then I’d get out and go look out the hospital room and realized I was in the hospital,” she explained.

After a while, the swelling went down and doctors say she is expected to be okay but will continue to stay on antibiotics. David Moore, an entomologist at Lynchburg General Hospital said the spider she was bitten by is normally found in the eastern part of Tennessee but he is not surprised that they’ve made their way up to Virginia.

“You’re typically going to find brown recluse around rocks, piles of inner tubes, utility boxes, piles, under bark, and other areas,” David said. “Inside a home, they like to be in undisturbed areas, so like in boxes, among some papers.”