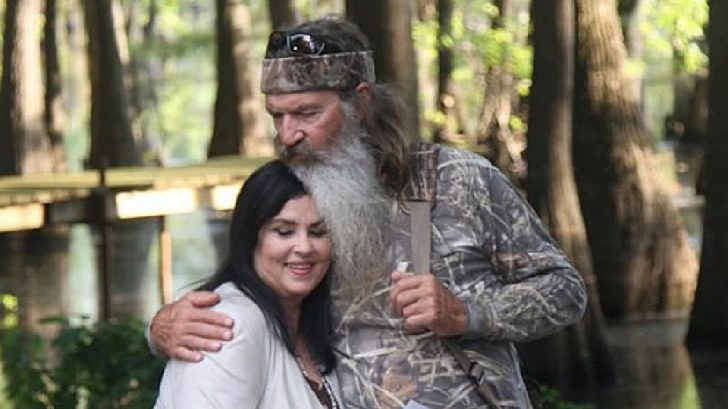 Duck Dynasty matriarch Kay Robertson is recovering after being bitten in the face by her dog, Bobo. Kay’s husband,Phil, detailed the incident on the June 23rd episode of the Unashamed podcast, a podcast he co-hosts with his sons Jase and Alan.

In the episode, Phil recalled the moment Kay woke him in the middle of the night for him to take her to the hospital.

Phil asked Miss Kay to move the rag from her face so he could assess her injury. He wasn’t prepared for what he saw.

Miss Kay told Phil that as she leaned down to kiss her dog Bobo goodnight, it startled him awake and he bit her out of fright.

“I thought he was awake and just relaxing. I went over and bent down to wish him a good sleep,” Kay told Phil. “When I woke him up he just come at me.”

With the help of his daughter Phyllis who is a nurse, Phil carried Miss Kay to a local hospital where “they stitched it all up and pulled it together.” But, the injury will likely leave Miss Kay with significant scars, according to Phil.

Less than a week after the the dog bit, Kay shared photos of her face injuries and an update with TMZ.

Kay told the publication that she looks worse now than she did when she first went to the hospital due to stitches and bruising, but she is able to cover it up with a face mask when she’s out in public. She also said that her mouth is full of stitches so she’s on a liquid diet at the moment, only able to drink through a straw.
Doctors expect Miss Kay to recover well and “it will take about 4 weeks for her lips and bruises to heal. After that, she’ll need some plastic surgery to fully repair her lip … but then her doc says she’ll be back to her old self.”

See the photos of Miss Kay’s dog bite injuries below. Be warned. Some readers may find these photos graphic.

We wish Miss Kay a full and speedy recovery.