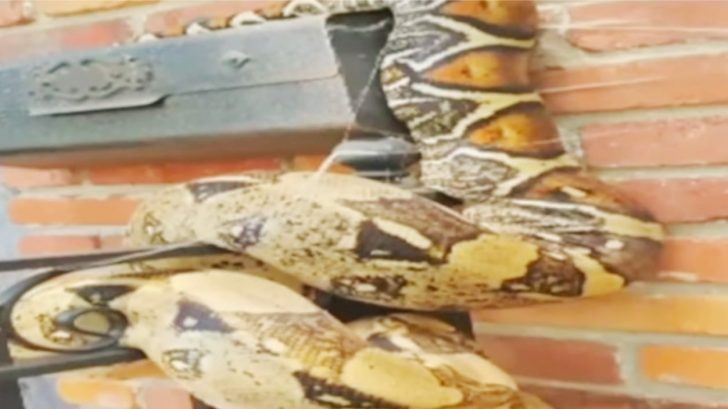 Snakes have been found in some of the strangest places…sandboxes, cars, and even Walmart shopping carts. And an alarming number of snakes seem to emerge in people’s toilets.

It seems that mailboxes are also a common safe haven for snakes, including one Dekays Brownsnake that scared a postal worker in North Carolina in 2019. The mailman, likely not knowing the snake was non-venomous, refused to deliver the mail until it was removed.

But that wasn’t the first time a postal worker has been scared by an unexpected snake resting on a home’s mailbox.

In 2018, one postal worker in Kansas was shocked to discover that a mailbox was being occupied by a giant snake. The monster reptile was resting on top of the mailbox, but was so large that it also wrapped itself around the railing of the stairs leading up to the door.

The terrified postal worker immediately called animal control, and officer Amy Nash responded to the call. As she told KCTV5 News, she assumed the snake in question was just a “wild snake” like a black snake.

But she soon learned her assumption was way off. “It was very, very large. Much larger than I knew I could handle on my own,” Nash said.

It took a total of three animal control officers to untangle the massive snake from the mailbox and the railing.

So what type of snake was it, and how did it get out there? Well, it happened to be a red-tailed boa, which can be dangerous. As Nash explained, “they’ll constrict you, and harm you if they want to eat you.”

Animal control believes the boa was a family pet that escaped, since they aren’t native to the region and it appeared well-fed and well-hydrated. After it was rescued, the snake was placed in a foster home with a “snake expert” in the area.

You can learn more about the monster snake’s reign over a Kansas home’s mailbox by tuning in to the news report below. That’s one day the postal worker and animal control officers are sure to never forget!