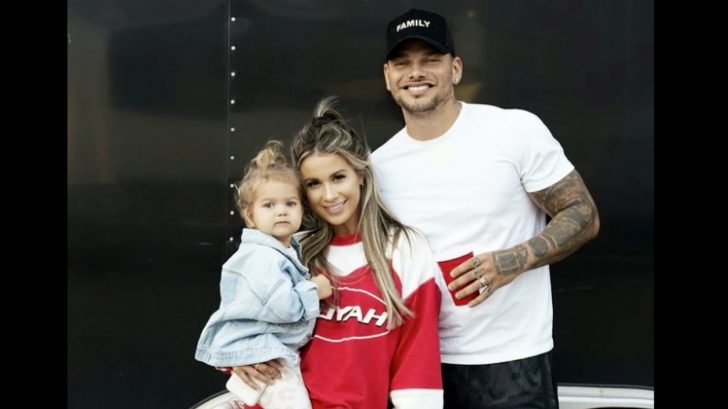 Kane Brown and his wife, Katelyn, surprised the world when they announced they welcomed their second child on December 30. The reason why the news came as such as surprise is because they never announced they were expecting!

Katelyn also introduced their daughter on social media, writing, “Blessed with another beautiful angel Kodi Jane Brown… we love you so much.”

After sharing the news of Kodi’s birth, the Browns posted some photos they had been holding on to.

In a hilarious clip, Katelyn shared a bunch of images throughout her pregnancy with Kodi. She captioned the video, “Try hiding a pregnancy for 9 months.”

Kane shared a photo of him, Katelyn, and Kingsley that shows Katelyn cradling her baby bump. She and Kingsley wore coordinating pink dresses for the photo shoot.

“Been holding on to these pics...” Kane said. “I’ve always wanted a son until I had Kingsley and now I’m good with all my girls.”

In another post, Katelyn explained why she and Kane wanted to keep their second pregnancy a secret. Next to one of her previously-unseen maternity photos, Katelyn wrote:

“These past 9 months have been so sacred and special to me. Choosing to keep my pregnancy quiet was the best decision I’ve ever made. Soaking in special moments with my daughter and husband without the influence of social media and outside world made this time that much more intimate and unforgettable.”

Katelyn thanked her followers for “the kind messages and love” sent her way after announcing Kodi’s birth. She said she is “so grateful and blessed” to be Kingsley and Kodi’s mother.

“[I] can not wait to raise strong, confident, sweet little ladies with you @kanebrown_music … you are the man we all look up to,” she ended her post.

Look below to read Katelyn’s complete explanation for why she and Kane kept their second pregnancy private. Congratulations to the two of them on their new arrival!