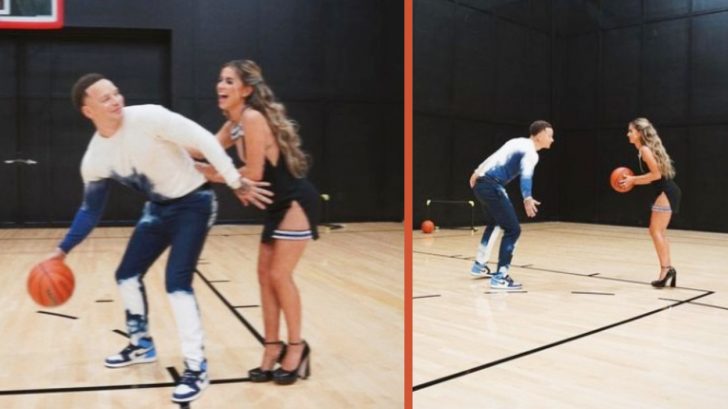 Kane Brown loves basketball so much, he had a small court built at his house. He found some time to play a quick game before Tuesday night’s (November 8) BMI Country Awards, which he attended with his wife, Katelyn.

The past few months have been pretty exciting for Kane and Katelyn. They just released their first duet together, “Thank God,” on September 12.

“Thank God” is currently one of the biggest hits in country music, having reached the fifth spot on the Hot Country Songs chart. Its official music video has over 9.1 million views.

In the midst of such an exciting time in their lives, Kane and Katelyn were looking forward to celebrating at the BMI Country Awards. Sony Music Publishing was honored during the ceremony for publishing 25 of the 50 most-performed country songs of the year, including Kane’s “One Mississippi.”

Before they left for the BMIs, Kane and Katelyn engaged in a fun game of basketball at home. But it wasn’t an average game. Katelyn was all glammed up in her awards show outfit…including a pair of super high heels!

“1v1 who won?…she’s in heels y’all better say me!” Kane captioned a photo of him and Katelyn on the basketball court.

“A little ball before BMI’s,” Katelyn captioned her own set of photos. You can see those pictures below.

We wonder who ended up winning their game?