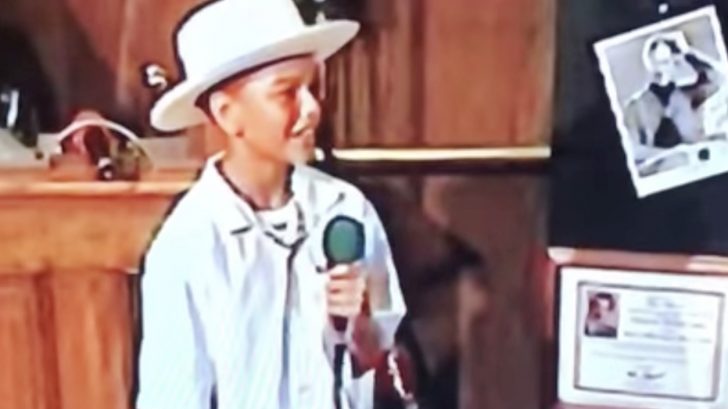 Kane Brown made his name in country music by uploading videos of him singing covers of classic hits but what most people don’t know is that this country star started singing when he was just a little one. Let’s just say…it is one of the most adorable things y’all will see all day.

His Rise To Fame

Kane Brown broke through barriers when he jumped on the music scene. With no connections to producers – the then-FedEx driver was just posting cover songs to YouTube part-time. It was his company manager who believed in him enough to tell the young singer he needed to quit his day job and pursue music full time.

Brown was able to get a publishing deal, move down to Nashville and work his butt off to make a name for himself. It was his George Strait “Check Yes or No” cover in 2015 that caught the attention of country mega-stars like Jason Aldean and Florida Georgia Line.

Making It In The Big Leagues

He debuted his self-titled album in 2016 featuring “Thunder in the Rain” and “What Ifs” – later releasing a deluxe edition which included his hit song, “Heaven.”

@kanebrown I tell everyone If you buy any CD, buy this CD! Trust me! Track for Track, 1 of the best CD's you will ever buy. It's that good. pic.twitter.com/NC2JlVemWI

When he isn’t touring or creating music, Brown spends his time with his wife, Katelyn. The two were married on October 12, 2018, at Spring Farms in Franklin, Tennessee, and have a daughter, born October 29, 2019.

With all the crazy, wonderful things going on in his life – it is great to see that Brown remains humble and remembers his roots. He recently shared a video of him recording a cover song just like the old days before he was famous!

He followed up this throwback with yet another. He posted to social media saying that he was “12 years old my first time on stage singing the one and only Tim McGraw.” The adorable Brown stood up on stage with his hand in his pocket, and a hat on his head as he shyly moved through the lyrics. Boy, has he come a long way!

You can check out the adorable recording below and let us know what you think in the comments.