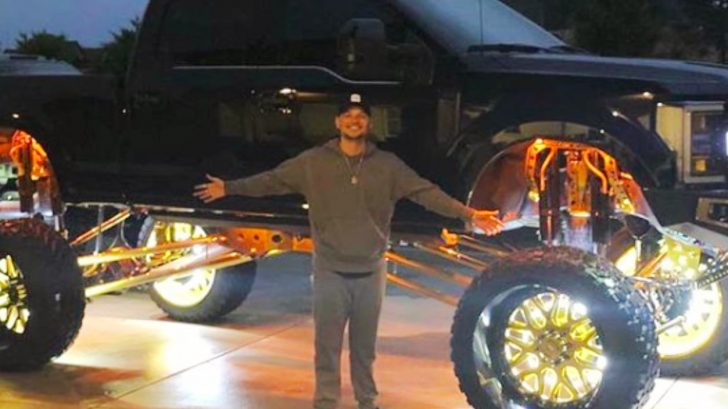 In October 2018, Kane Brown introduced his then brand-new, custom-made dream truck to his fans. Every detail of the Ford F-250 was crafted to capture exactly what Brown wanted in a truck.

A total of 16 separate vendors worked with Brown to create his “dream truck.” Those vendors helped Brown create one epic automobile, with the most impressive feature being its 19-and-a-half-inch lift.

When asked by Taste of Country to describe his favorite part of the truck, the lift is what Brown referenced. “A 19-and-a-half-inch lift, all gold underneath,” he said. “The wheels are gold with a black lip around on 42-inch tires. Twenty eight-inch wheels.”

In addition to featuring an impressive lift, Brown also had the grille of his truck customized. His personal emblem was placed on the vehicle’s grille and was even illuminated.

Looking at photos of that truck, you’d think that Brown would want to keep it forever. But, in a surprising turn of events, the “Good as You” singer is now attempting to sell the truck…less than a year after he got it!

Brandon Roussell appears to be the person Brown has entrusted with the sale of his monster truck. In a post made to Instagram, Roussell posted a picture of the truck, which shows Brown’s custom, illuminated grille. So there’s no denying it’s his truck!

According to Roussell, the truck only has 12,800 miles on it and all regular maintenance has been done. He also made it clear that you won’t get to meet Brown if you buy the truck or come out to look at it.

So how much will Brown’s dream truck cost its new owner? Roussell’s post lists the price as $120,000.

FOR SALE! Serious inquires only!!!!!!!!!!! No I will not get you a meet and greet!!! $120,000 is the price!!!!2018 Ford F-250 king ranch loaded. Has 12800 miles and is ready to go! 19.5 inch ultimate air ride lift, 42×15.50r28 fury mts, 28×16 American force wheels, fully tuned and deleted by with Ppei tunes and ez Lynk, 5 inch turbo back Mbrp exhaust, body guard front and rear bumbes, custom boost bars custom grill, rk sport hood, custom powder coat on suspension. I know im missing a lot of parts but there’s to much to list. CONTACT ME FOR INQUIRES I WILL MEET YOU SHOW THE TRUCK FOR A SERIOUS BUYER! All regular maintenance on the truck has been done. Asking 120k. Again contact me for all Info!

That’s quite the hefty price tag! But, it’s understandable, since the truck was custom-designed and so much time went into creating it. It’s a beautiful truck, so we’re sure they won’t have any trouble finding a buyer!

Once Brown sells his truck, he won’t be left without a ride. In January, he bought an 1978 Ford F-150, and he seems to be using that as his primary vehicle anyway.

Brown sure loves his trucks!

Before he got his dream truck, Brown was cruising around in another monstrous ride, a GMC Denali. During an interview with Taste of Country, he revealed that he had even given the truck a name…”Rex.”

You can check out that interview in the clip below.