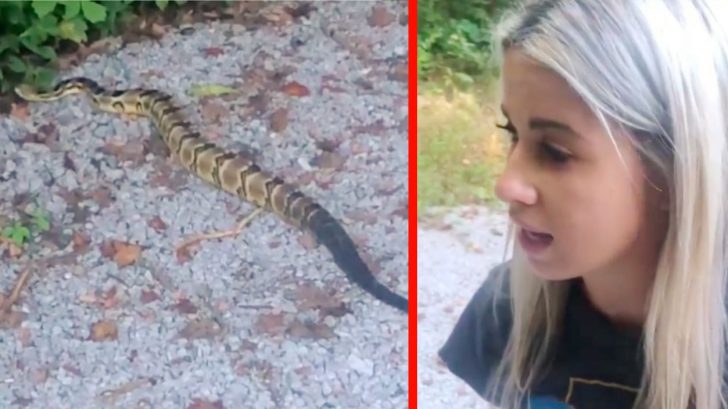 Kane Brown and his wife, Katelyn, were just enjoying a peaceful summer evening at home this August when an unwanted guest came along and destroyed that peace.

That unwanted guest wasn’t a rowdy neighbor or a friend who came over without an invite. Rather, it was a massive snake that looked like it had a rattle on the end of its tail!

Kane filmed the entire encounter and shared the video on Instagram. In it, you can see just how huge the snake was…it was both long and girthy!

After a few quiet seconds of filming the snake, you can hear a female voice in the background shrieking “Babe are you kidding me?” That voice, of course, belonged to Kane’s wife Katelyn, who sounded like she was going to faint once she caught sight of the snake.

Kane turned the camera around to focus on his distraught wife, who just kept saying over and over again, “What is that?” She then posed the question we were all wondering, asking “What kind of snake is that?”

Her husband quickly pointed out that the snake looked like it had a rattle on the end of its tail. And that’s likely, since timber rattlesnakes live in Tennessee where the Browns live.

However, if Katelyn has it her way they may not live there much longer. While Kane seemed calm and even sort of mesmerized by the snake, Katelyn was terrified. She quickly informed Kane, “We’re moving!”

She doubled up on those sentiments in the comments of Kane’s post, writing that she was already packing up their things.

Many of Kane’s fans and fellow artists agreed with Katelyn, either writing horrified responses of their own or advising the Browns to get out of Dodge as fast as possible.

You can see the couple’s snake encounter by tuning in to the clip below. How would you react if you were placed in this situation? More like Kane, or more like Katelyn?