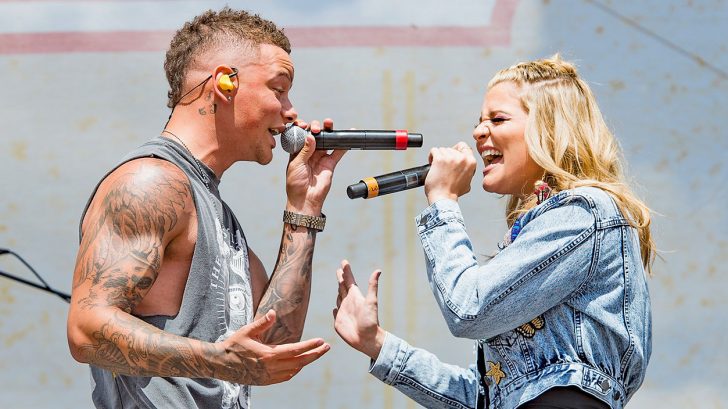 When it comes to female collaborations, it seems that Kane Brown knows what he’s doing. In February 2017, he released the single “What Ifs,” with fellow country singer Lauren Alaina. It became both of the singers’ first number one single and dethroned Sam Hunt’s record-breaking 34-week reign at the top of the Country Airplay charts. The song was certified Platinum and was the third-most listened to country song of 2017.

Since Brown is already working on his follow-up album to his extremely successful debut self-titled album, fans have been wondering what collaborations he could be cooking up, and he is already thinking about his next possible female duet partner – his fiancé Katelyn Jae.

Now, if that seems like a far-fetched idea, you haven’t heard her sing! According to Heavy, she actually won the first season of YOBI.tv and MySpace’s “Take The Stage” contest and released an EP titled Finally.

Take a listen to Jae singing the National Anthem in 2016 below.

“We have talked about it,” Brown told PopCulture.com about collaborating. “She did the artist thing. She loves to sing. She’s got an incredible voice, but she doesn’t want people to think that she’s using me to get to music. That’s why we have that karaoke machine. She loves singing, so she sings in the living room every night, all this stuff. I mean, I don’t have to hear, but I’ll be upstairs playing Xbox telling her to be quiet. Then all I hear is her downstairs. I’m like, ‘Babe!‘”

Fans got involved in pressuring them to record together when they posted a cute video on Valentine’s Day of them singing the Julia Michaels’ pop tune “Issues.”

“I actually thought about it,” he said. “At first I was kind of nervous about the same thing. Then I was like maybe we could throw some surprise on there for the fans on the album, the second album.”

Watch their sweet duet below, and let us know if you think they should record a duet together!