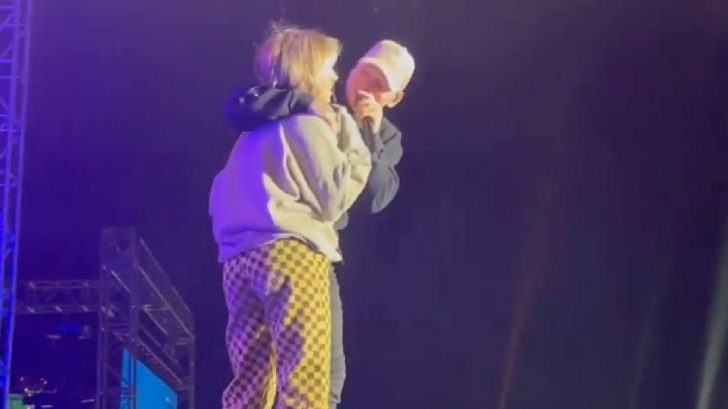 Kane and Katelyn Brown’s love story is one for the books. After dating for a while, Kane revealed to a live audience that he had proposed to the love of his life and were married on October 12, 2018 in front of about 200 guests at Mint Springs Farm in Nolensville, Tennessee.

Just a couple weeks after celebrating their first wedding anniversary, Kane and Katelyn welcomed their darling daughter, Kinglsey Rose, into the world on October 29, 2019.

On December 31, 2021, the Browns revealed Katelyn had given birth to their second daughter, Kodi Jane, which was a huge surprise to fans because they never even announced her pregnancy!

The Katelyn and Kingsley joined Kane on the road quite a bit previously, so it’s no surprised that the whole family is on the road now while Kane is touring the country on his Blessed & Free Tour with openers Chase Rice and Restless Road.

During a recent tour stop, Kane brought his wife Katelyn out during his performance of “Worship You,” which he first debuted on his Instagram account in May 2020. In the video, he was holding Kingsley, just six months old at the time, and singing to her and Katelyn.

During his performance, he had his arm wrapped around his wife and sang the chorus to her. She was singing along with a huge smile on her face. As she walked off the stage, Kane said, “She got out the house!”

Katelyn has probably been holed up at home with their newborn daughter!