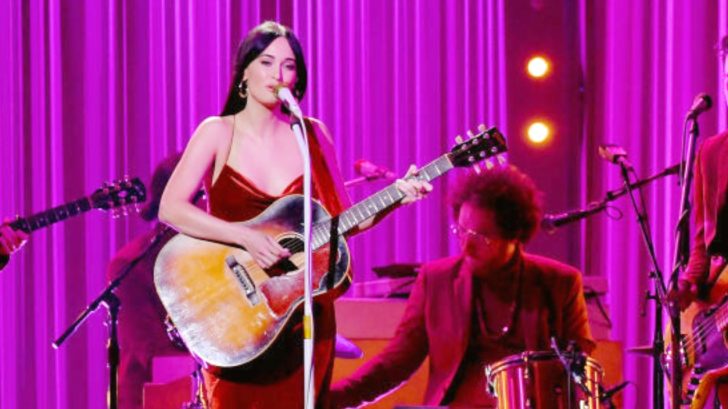 This Year Has Been Kacey’s “Golden Hour”

2018 has been one of the most eventful years of Kacey Musgraves‘ entire career. It all kicked off just days before 2017 came to an end, when she revealed the title of her third studio album, Golden Hour.

The album’s first singles, “Butterflies” and “Space Cowboy” were released in February 2018.

Throughout the remainder of the winter, Musgraves continued to release more songs prior to the album’s debut. The songs she premiered during that time were “High Horse” and “Slow Burn.”

Golden Hour arrived on March 30, and was an instant critical and commercial success. It topped the country albums chart in both the U.S. and the UK, and reached the fourth spot on the all-genre albums chart in the U.S.

Golden Hour‘s success led to Musgraves earning her first CMA Awards nomination since 2016. She was nominated in two categories at this year’s ceremony, including Female Vocalist of the Year and Album of the Year for Golden Hour.

So when it came time for the CMA Awards to pick its performers, it was no surprise that Musgraves was one of the artists chosen. But the song she chose to perform was a surprise for all who watched.

You see, even though Musgraves has released three singles off of Golden Hour, she regularly switches up which songs she performs live, sometimes singing tracks that aren’t even singles.

For example, during a recent appearance on Jimmy Kimmel Live!, Musgraves sang “Wonder Woman” and “Love Is a Wild Thing,” neither of which are singles.

Musgraves’ random song selection for past live performances made it a total mystery which song she’d perform at the CMA Awards. Fans couldn’t help but wonder if she’d debut yet another new track, or if she’d revisit something she had already performed.

Finally, they got their answer when Musgraves took to the stage on Wednesday night (November 14). The song she chose to sing was one y’all already know…”Slow Burn.”

Wearing a red velvet dress, Musgraves stood on a dimly-lit stage with a small band to perform the sultry song.

We could listen to @KaceyMusgraves all day and night! Love this song and album. #SlowBurn #CMAawards pic.twitter.com/H88COOHsnh

Musgraves’ CMA Awards performance was just as magical as you’d expect it to be! Make sure to relive all of its splendor by tuning in to the clip below.

You could watch her sing this all day!

This song may be a Slow Burn, but our love for @KaceyMusgraves certainly isn't! #CMAawards pic.twitter.com/Cdus8lngG7