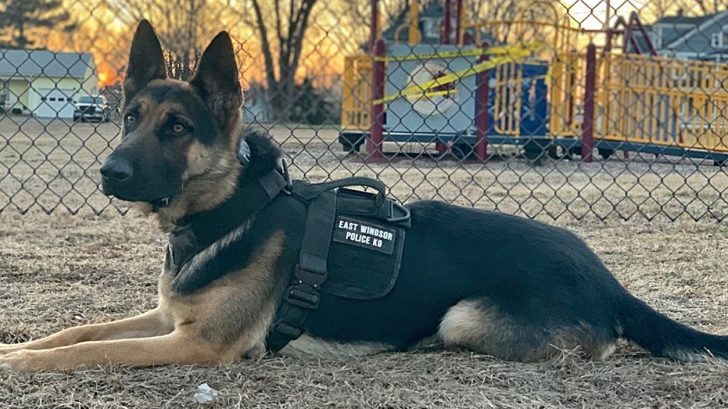 In a time full of craziness comes a heartwarming story about a police dog saving the life of an elderly man who had got lost wandering off on his own in the middle of the night.

I was nominated by Middletown K9 Handler Officer Bloom @k9kodampd for the 10-day dog challenge. Every day, I will select a picture of a day in the life of Mylo or a moment of pride as a dog handler. . Day 1- This picture is from the day I first met Mylo and he came home with me. After I picked him up, we had to report for evening shift at work. It was a great bonding experience to have him with me for most of our first day together. . @glastonburypd_k9soleil your time has come!!!

East Windsor, Connecticut Police Department shared a post on Facebook yesterday (August 4, 2020) informing the public that Officer Mitchell and his K-9 named Mylo were called in to help find the missing man.

They arrived to his home around 3:30am in the morning and spoke with the family who said he had been missing for about 25-30 minutes. Officer Mitchell requested an item from them that had the man’s sent on it, so the family grabbed his pillowcase and brought it to the officer.

After a few sniffs, Milo was ready to do what he was trained to do. With his powerful sense of smell, he leads the officer a half a mile down the street to the back yard of an abandoned house.

At this point, the officer could hear a loud banging from inside the vacant home and Mylo was determined to get inside, so they made their way in. The found the elderly man in a bathroom where he had accidentally locked himself inside and was desperately banging on the door, calling for help.

“If it wasn’t for Mylo’s nose, it would have been very difficult to find the elderly male,” officers said in the Facebook post.

The man was returned back to his home and the family was immensely grateful to have him back. You can view the East Windsor, Connecticut Police Department statement in the Facebook post below.

Early this morning at approximately 3:30 A.M., Ofc. Mitchell and K9 Mylo responded to South Windsor to assist their…

ALSO: Learn How To Train A Dog To Find Any Scent In The Video Below