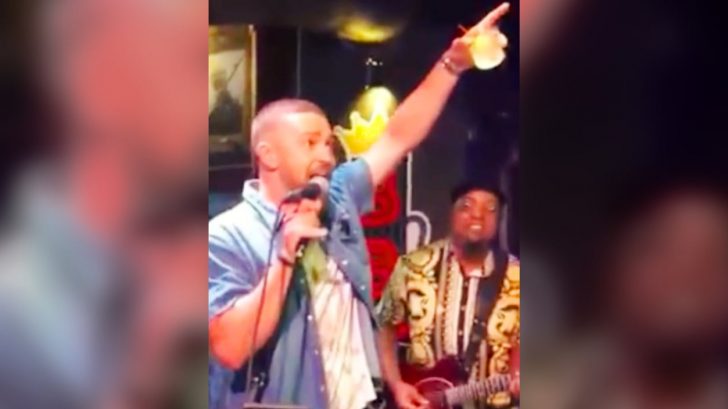 Patrons in B.B. King’s Blues Club in the popular Beale Street Entertainment District of Memphis, Tennessee got quite a treat in the summer of 2019.

Pop star Justin Timberlake stopped by to give an impromptu performance at the club, much to everyone’s delight. But instead of singing one of his own songs such as “Can’t Stop the Feeling!” or “Rock Your Body,” he picked a song that has deep roots in country music…”Tennessee Whiskey.”

Timberlake is no stranger to performing “Tennessee Whiskey,” which was originally recorded by David Allan Coe and later made famous by George Jones. But the song’s popularity reached new heights when Chris Stapleton performed it with Timberlake on the 2015 CMA Awards.

The duo performed “Tennessee Whiskey” as part of a mashup that also included Timberlake’s song, “Drink You Away.”

Immediately, viewers hailed the pair’s performance as one of the best in CMA Awards history. The performance boosted Stapleton’s career in an instant, and he is now one of the biggest stars in all of country music.

Timberlake and Stapleton have remained close through the years, and consider themselves to be good friends. They even took part in a second collaboration, a song titled “Say Something.”

That track was released in 2018 off of Timberlake’s album Man of the Woods. Fans loved the song, and it hit the ninth spot on the Billboard Hot 100.

So when Timberlake rolled in to B.B. King’s Blues Club in Memphis, he decided to honor his friend by singing a little “Tennessee Whiskey.” Thankfully, someone caught the whole performance on tape.

If you weren’t one of the few lucky people that got the chance to see Timberlake’s spontaneous “Tennessee Whiskey” performance live, then check out the video below.