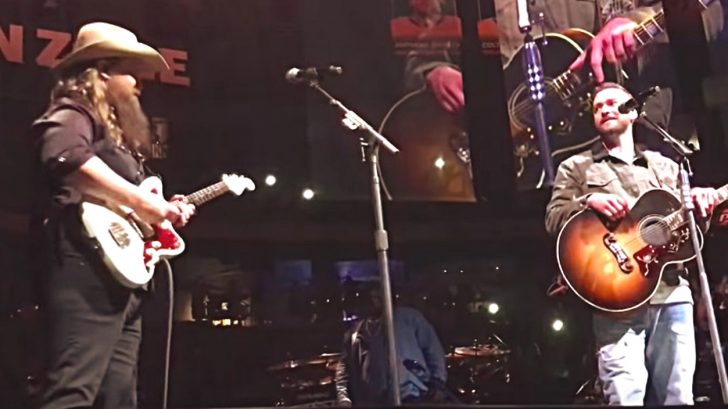 Ever since Justin Timberlake and Chris Stapleton performed together at the 2015 CMA Awards, the hunger to hear more from the two of them has been intense. Thankfully, they’ve been willing to deliver.

As good friends, it’s not at all uncommon for Timberlake and Stapleton to stop by each other’s shows. When they do, they cause quite a stir, especially if they sing Stapleton’s megahit, “Tennessee Whiskey.”

After seeing how much people enjoy listening to them sing together, Timberlake and Stapleton decided to collaborate on an official song. That song became “Say Something,” their current hit duet that’s torching the charts.

Even though “Say Something” is fairly new, Timberlake and Stapleton have already performed it live a number of times. The two played it on The Tonight Show following Timberlake’s performance at the Super Bowl, and also teamed up to sing it at the BRIT Awards.

Now, they can also check off Bridgestone Arena in Nashville as the latest venue where they’ve performed “Say Something.”

It was Timberlake, not Stapleton, who was scheduled to perform at the famous Nashville venue. There had been whispers all day that Stapleton would be making a surprise appearance. Those whispers turned out to be true.

Crowd Has Thirst For “Tennessee Whiskey”

During his concert, Timberlake thrilled everyone watching when he welcomed Stapleton to the stage. While they were obviously excited to hear them sing “Say Something,” nothing got a rise out of them quite like the duo’s performance of “Tennessee Whiskey.”

Building up the anticipation, Timberlake started counting off. “One,” he said with a slight pause before continuing. “Two,” he said a little louder.

Then, he called on the crowd to count with him. Starting back at one, Timberlake and the audience counted all the way to three before Stapleton broke out into the opening guitar solo of “Tennessee Whiskey.”

The crowed roared as soon as they realized what was happening. You can feel the excitement in the room just by watching a video!

And you can do exactly that by checking out the video below. We get why the crowd was so stoked…this had to be a sight to see and hear!