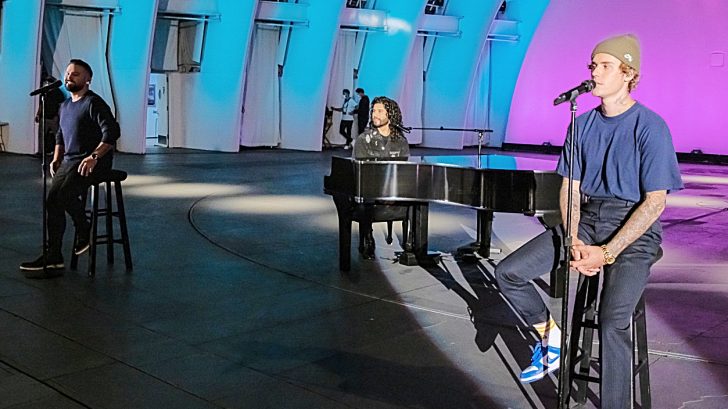 This was the first time they performed the song together on TV.

BE HONEST: Did you cry during Dan + Shay and Justin Bieber’s performance of “10,000 Hours” during the #CMAawards? They performed to an empty #HollywoodBowl — a surreal scene. #JustinBieber #DanAndShay (? Dustin Downing/CMA) pic.twitter.com/f4NEmG1rGa

“10,000 Hours” is nominated for three CMA Awards tonight, including Single of the Year, Musical Event of the Year, and Music Video of the Year.

The music video for “10,000 Hours” featured all three of the artists’ wives.

The 54th Annual CMA Awards aired live Wednesday, November 11, 2020. Like other award shows, the CMAs had to adjust how they did things this year to adhere to COVID-19 safety guidelines. There was no live audience, but country artists were able to attend the awards show in person, all distanced from each other.

The CMA Awards were established in 1958 and was the very first trade organization formed to promote an individual genre of music. In 1967, the first CMA Awards Banquet and Show was held, and the following year it was broadcasted for the first time on television. It is the longest-running, annual music awards program on network television.

Watch their first performance together of “10,000 Hours” below.