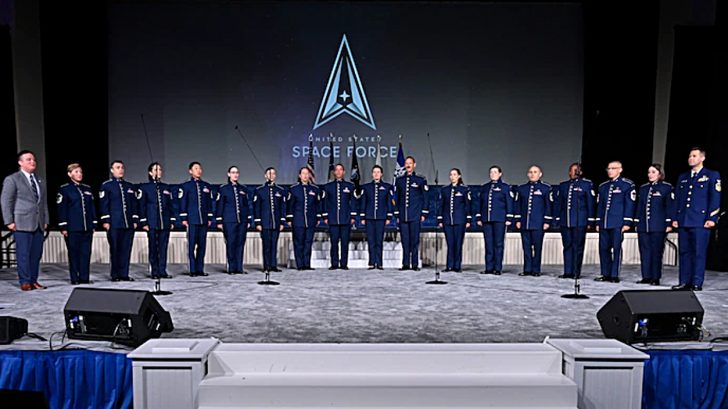 The United States Space Force announced on September 20, 2022, during the 2022 Air & Space Forces Association Air, Space and Cyber Conference in National Harbor, Maryland, that the official song for the military branch will be “Semper Supra.”

The U.S. Space Force is the newest military branch which was established in 2019 and officials said the name “Semper Supra” was named after the USSF motto, which is Latin for “Always Above.”

“It was created to capture the esprit de corps of both current and future Guardians, and intends to bring together service members by giving them a sense of pride,” Space Force wrote on their wesbite.

During the announcement they said that two former service members collaborated to create the song, which was a process that took them years of research and revisions to make sure the song was ready for release.

“The song was a long work in progress because I wanted it to encompass all the capabilities that the Space Force offers and its vision,” according to James Teachenor, a singer/songwriter who created the lyrics and melody and was the visionary composer and driving force of the song’s creation, Space Force wrote on their wesbite.

James was a prior member of the U.S. Air Force band at the Air Force Academy and worked with Chief of Space Operations Gen. John “Jay” Raymond to begin writing the song when Space Force was formed in 2019.

“This is a once-in-a-lifetime opportunity to establish a Space Force song that will be part of our culture and heritage for years to come,” Raymond said, according to Space Force. “Our traditions are part of the fabric that weave us all together as we execute our missions side-by-side; I will be proud to sing ‘Semper Supra’ alongside my fellow Guardians.”

After creating the foundation of what the song would be, the song was sent to various military bands that could create a musical arrangement to give finishing touches and complete the song’s sound.

Here are the offical lyrics for the song:

We’re the mighty watchful eye,
Guardians beyond the blue,
The invisible front line,
Warfighters brave and true.
Boldly reaching into space,
There’s no limit to our sky.
Standing guard both night and day,
We’re the Space Force from on high.

Over 12 musical submissions of the song were under review by James and chief musician Sean Nelson, U.S. Coast Guard Band trombonist and staff arranger, who collaborated on making it perfect.

“I received the melody and words from James, and he wanted me to help add the harmony and to orchestrate it,” Sean said, according to Space Force. “At first, it started with singing and the piano. I became familiar with the other branches’ songs, but I wanted this one to have its own modern spin to reflect what the Space Force is – modern, new and very advanced.”

Nelson said he added more than 30 instrument parts before the song’s arrangement was played and recorded by the USCG band and submitted to the Space Force for review.

After many months of development, revisions, and variations in coordination with the USCG band, the Space Force picked the final version of “Semper Supra,” to capture what it means to be a Guardian.

Listen To “Semper Supra” In The Video Below