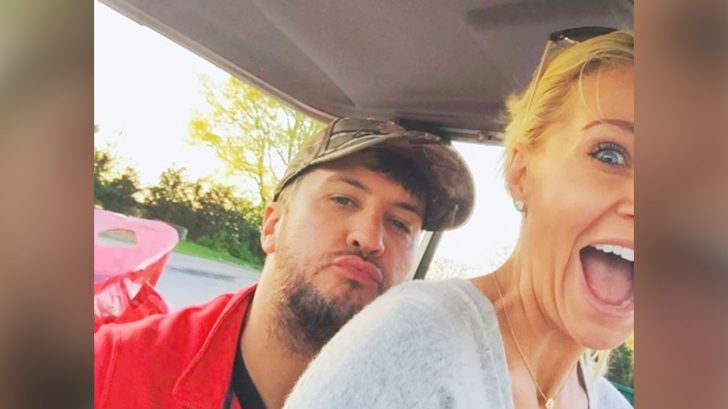 Luke and Caroline Bryan are the country music king and queen of Halloween. Year after year, the hilarious couple has left us in stitches over their ridiculous Halloween costumes.

In case you forgot about some of their past attire, Caroline shared a throwback slideshow of a few of their best costume pairings.

Most of the photos capture the year they comically dressed up as senior citizens, with Luke dressing as a curler-wearing old woman and Caroline dressing as a grumpy old man. But other photos and videos also show the years they dressed as a turkey and deer, as well as inflatable T-Rexes.

Luke kept rolling with the inflatable costume trend in 2018, but not with Caroline. He also dressed up for a visit to Live with Kelly and Ryan with his fellow American Idol judges, and their costumes were pretty hilarious as well.

Lionel Richie was an adorable inflatable panda, while Katy Party looked cute as can be as an inflatable sloth. As for Luke? He dressed as a regal inflatable eagle for the occasion.

I’d say we had a little fun today on @livekellyandryan #Repost @americanidol ・・・ Who wore it better? ??? #AmericanIdol #TheNextIdol

But when it came time for their family Halloween festivities, Luke and Caroline ditched the inflatable costumes in favor of something a little furrier. Though they still kept the animal theme going with their getups.

Caroline first offered a sneak peek at her costume in a pair of videos she posted on Halloween. In case it wasn’t obvious to anyone what she was dressed up as, Caroline spelled it out in the place where her location is normally noted on Instagram.

Instead of saying a city or a state, the location simply read “Squirrels.”

But as you can see, at the time that Caroline filmed that video, Luke wasn’t in costume yet. Fans knew they’d have to wait patiently to see what sort of hilarious thing he would dress up as.

Finally, Caroline shared a set of photos showcasing her and Luke’s comical costumes. And let us warn y’all, one look at these photos will leave you laughing like nuts.

Be Prepared To Laugh Until It Hurts

As she indicated earlier, Caroline was indeed, a squirrel. To match her, Luke dressed in the most hilarious costume you’ve probably ever seen…he was an acorn!

As you flip through the slideshow, you’ll see more glorious photos of Luke and Caroline’s Halloween adventures as an acorn and squirrel. There’s even a video that shows Caroline hopping on Luke’s back and trying to bite him.

These two really outdid themselves with their costumes this time around. How are they ever going to top this next year?

If you still haven’t gotten enough of seeing Luke in costume, tune in to his special Halloween-themed interview with his other American Idol judges below.