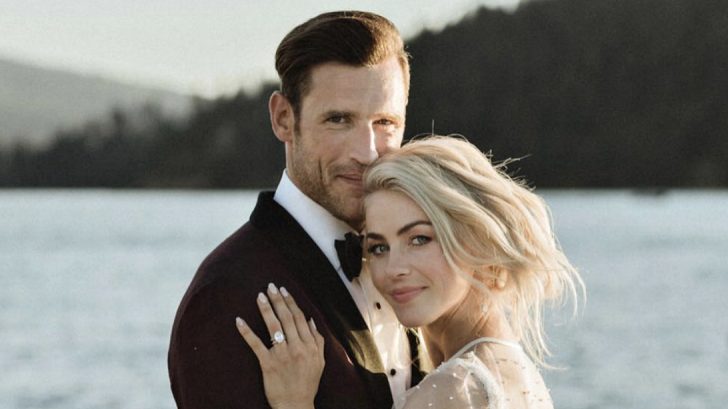 Two years ago, Dancing With the Stars pro Julianne Hough tied the knot with professional hockey player Brooks Laich in a stunning outdoor wedding in Coeur d’Alene, Idaho. The pair announced their engagement in August 2015 after a year and a half of dating. Despite being together for four years before they wed, Julianne and Brooks left one matter unresolved….Julianne taking Brooks’ last name.

In a recent episode on his podcast How Men Think, Laich opened up about the fact that his wife kept her maiden name and called her decision “a little jarring.”

“I don’t find it disrespectful,” he said of his Julianne’s choice. “I’m obviously open to it, but at the start, yeah, it was a little jarring for me.”

Laich shared that the topic had been an ongoing discussion since early on in their relationship, and he looks forward to the day that Hough officially changes her name.

“When we first met and got engaged and stuff, we had this conversation and I was like, ‘I want you to take my last name,’” he recalled to his podcast co-hosts. “I said that. It was important to me.”

The fitness guru said that the topic is less of an issue than he expected it to be, now that they’re married. But, it may become an issue again once the couple have children. “When we have children, I would want them to have my last name, our last name.”

“I’m actually kind of surprised that it hasn’t become an issue in our relationship because I do, as a man, I take pride in the last name and being, having that last name as the family name and especially when we have kids, I think that will amplify,” he said. “To be fully honest, I would like my wife to have my last name, whether it’s now or sometime in the near future or far future.”

Hear more from Brooks Laich by checking out his podcast, How Men Think, here.