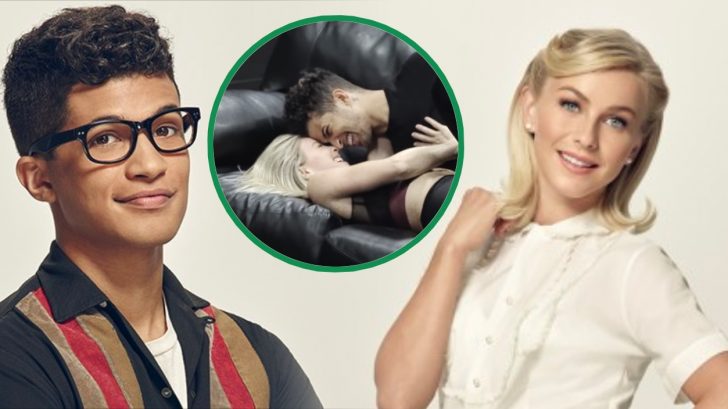 For the first time since 2010, Julianne Hough released new music back in September.

She debuted the song, titled ‘Transform,” during the finale of America’s Got Talent with the help of contestants and dance crew V.Unbeatable.

When she released the song, she wrote on Instagram, “I’m so excited to share this part of me with all of you, this is gonna be so much fun – and it’s just the beginning!⁣⁣”

And it turns out, it truly is just the beginning! On Monday (Dec 2), Julianne released another song, this time it was a Christmas song. Titled “All I Want For Christmas Is Love,” it is a duet with Jordan Fisher, who is an actor and Broadway star who won Season 25 of Dancing With The Stars.

It’s December! Get in the holiday spirit and stream @juleshough’s and my new song, “All I Want For Christmas Is Love”

The song comes at a perfect time, since she and her brother Derek Hough are hosting their own Christmas special on NBC, Holidays With The Houghs, which will air on December 16!

Only a few more weeks until #HolidaysWithTheHoughs on @nbc!!! ?❄️⛄️ We've got tricks, we've got surprises, and most importantly we've got HOLIDAY SPIRIT. So thankful I get to work on fun projects with my bro @derekhough ??

According to Deadline, the special is “an hour-long show in which they will stage musical and dance performances, putting their spin on holiday classics.”

One of the performances will be Julianne’s new Christmas song with Jordan Fisher.

They released the official video on Monday (Dec 2) and it contains rehearsal footage of Hough and Fisher dancing to the duet as well as recording it in the studio. The two will also be performing the song at the Rockefeller Christmas Tree Lighting special on Wednesday (December 4), according to a post from Jordan.

Of the song, Julianne says, “The holidays are officially here, and I’m super excited to share this new Christmas song with you! There’s nothing quite like this time of year and the magical spirit that surrounds us. At the end of the day, it’s about love, and recognizing that love is the key to everything we need in our lives, not just this time of year, but always.”

This isn’t the first time these two talented folks have worked together. Jordan and Julianne also co-starred in Grease Live! together in 2016. Julianne played Sandy and Jordan played T-Bird Doody.

Watch the full video for Julianne and Jordan’s duet “All I Want For Christmas Is Love” below.