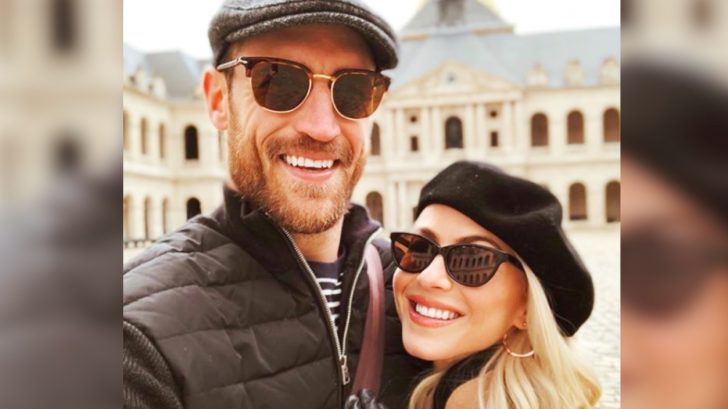 On July 8, 2017, dancer, actress, and country singer Julianne Hough married the love of her life, hockey player Brooks Laich, in a gorgeous outdoor ceremony in Idaho.

I wholeheartedly agree with everything @brookslaich said. @joesmith.la your presence, words, and love not only touched Brooks and I so deeply, but truly affected all of our friends and family. You truly have a gift from god, and he shines through in everything you do. We are so grateful that we will have this moment for the rest of our lives and that we get to share it with you. Our amazing friend ??❤️ #Repost @brookslaich ・・・ I want to thank my dear friend and pastor @joesmith.la for blessing my wife and I with his presence, advice, and service when he married us in July. The ceremony was the single greatest moment of my life and I am so grateful you chose to spend it with us! You are the man pal, the world needs more people like you and the blessings you share! #godbless ?

The couple embarked on a series of world travels following their wedding, venturing everywhere from Africa to Peru. Such vacations provided some much-needed escapes for Julianne, who has devoted a wealth of time to her acting career in the past year.

She recently appeared as fitness icon Betty Weider in the film Bigger, which was released in October. Just weeks after its release, Julianne’s next project was revealed.

The blond bombshell will have to transform into an auburn-haired seductress for her latest role as Dolly Parton‘s iconic character Jolene. A new series, titled Dolly Parton’s Heartstrings, will devote an episode to “Jolene,” with Brad Paisley‘s wife and actress Kimberly Williams-Paisley also starring.

It is such an honor to be working on this project with @kimberlywilliamspaisley and Dallas, and of course the one and only @dollyparton herself. You are such an inspiration! Miss Dolly wrote songs in the 60s and 70s that are still so relevant and meaningful today. With songs like Just Because I’m A Woman that she wrote about 40 years ago, she was and has been a strong, proud feminist… P.S. if you haven’t heard those lyrics, do yourself a favor and listen… Her stories have been told mostly through music, and most recently now through television. She is a true example of someone who has been in the industry her entire life and has always remained true to herself, expressing herself beautifully through her art. It’s an honor to be a part of this new chapter of hers to tell her already told stories through song now through pictures, and especially to depict one of her most iconic characters.. Jolene! Dolly, you are a true Artist, legend, Icon and Hero for so many… keep spreading your love, you are and always have been changing the world through your creativity and passion! I cannot wait to share this with all of you and bring Jolene to life! ❤️

Julianne Is Definitely A Dog Person

When Hough isn’t busy traveling or working on one of her various projects, you can catch her enjoying some down time at home with Brooks and their two beloved Cavalier King Charles Spaniels.

Lexi was Julianne’s first dog, and she fell in love with her right away. Speaking to Modern Dog Magazine in 2009, she explained just how much Lexi means to her.

“I’ve had dogs my entire life,” she said. “I love them so much, but I never took one on as my own until I got Lexi. When I got Lexi, she became everything to me. She is like my daughter.”

Julianne eventually gave her doggie daughter a sister to spend time with, welcoming second pup Harley into the family a little later.

Lexi and Harley have ruled the roost the past few years, but that’s all about the change. As Julianne revealed on social media on on Thursday (November 29), she and Brooks have a new addition in the family!

That new addition is a gorgeous husky named Koda, who the couple saved from a shelter following the California wildfires. Julianne described his rescue as “the most magical experience” for her and Brooks.

Despite the hardships Koda has been through lately, Julianne says “he still could not exude more love or joy if he tried.” And she made it extremely clear that she and Brooks are exuding love for Koda right back!

Our little family has grown by one, and we are soo in love (evidence of this morning’s wake-up cuddles in my story)! Rescuing him has been the most magical experience. He was put in a shelter during the fires, yet he still could not exude more love or joy if he tried. We couldn’t be more honored to be your new family, Koda. Your spirit is magic. ✨ But of course I can’t forget about our mommas ? I mean.. dead!

Only time will tell how well Lexi and Harley will adjust to having their new, bigger brother around!

One thing’s for certain, he’s going to be spoiled with so much love. He’s one lucky pup to have found people that love dogs as much as Julianne and Brooks!