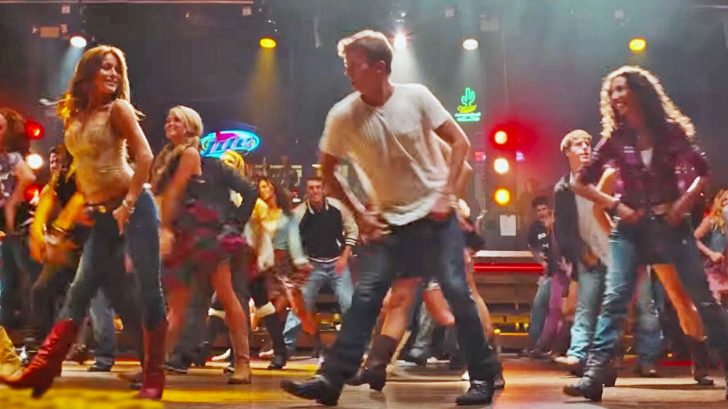 The 2011 film, Footloose is full of rockin’ dance moves and rebellious spirit. While there are a series of dance scenes that will make you wanna groove, one, in particular, has fans going nuts. The cast of the popular film had no problem gettin’ down and dirty in a sexy country line dance. Set to the tune of Big and Rich‘s “Fake I.D.” – these kids showed that they aren’t afraid to get a little sweaty.

The storyline revolves around the city of Bomont, Georgia putting a ban on dancing after Reverend Moore lost his son and four others in a horrific car crash. Fast forward three years, Boston native Ren McCormack, moves to Bomont ready to shake up the town.

With a little help of the Reverend’s rebellious daughter, Ariel who is played by Julianne Hough, of course!

Ren and Ariel – along with two other friends – sneak off to a nearby town and throw down on the dance floor, country style. The line dance is so infectious that it even caught the attention of Big and Rich themselves.

The country duo sat down with CMT to discuss the use of their song in the film, saying, “And just when you think that that’s pretty cool and really good, you find out that Julianne Hough is dancing to your song. And she looks so good and does such a fantastic job. It’s hot, hot, hot and on fire. It’s Big and Rich. It’s edgy and sexy.”

Footloose hit theaters in October of 2011 grossing $63 million dollars worldwide. With all those eyes on the screen, you can bet people wanted to learn the dances. Luckily, they have tutorials for that.

You can watch the sexy line dance in the video below.