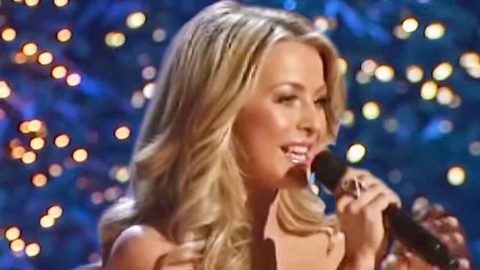 We all knew that Julianne Hough could dance, but she surprised us in 2008 when she released her debut, self-titled country album. The album topped the country chart following its release, and crossed over to claim the third spot on the all-genre chart.

Following the success of her debut album, Hough decided to release a holiday EP. Called Sounds of the Season: The Julianne Hough Holiday Collection, the album featured Hough’s renditions of some beloved Christmas classics.

Hough’s holiday EP was another hit, and peaked at the second spot on the country chart, the 24th on the all-genre chart, and the second on the holiday chart.

One of the songs Hough recorded for her album was “Jingle Bell Rock.” The song was first released by Bobby Helms in 1957, and has been part of the Christmas music cannon ever since. Other than Hough, some other notable country singers who have recorded the song include George Strait, Rascal Flatts, and Glen Campbell.

Now, Hough can add her name to that list.

You can’t ignore Hough’s vocal talent. Her voice contains a great deal of power, which made it easy for her to hit and hold out all of the high notes in “Jingle Bell Rock.” It’s a voice that country music has obviously responded well to, since she was the 2009 ACM Top New Female Artist and Top New Artist award-winner.

Tune in to the clip below to enjoy Hough’s recording of “Jingle Bell Rock.” It will get you in the mood for the holiday season.