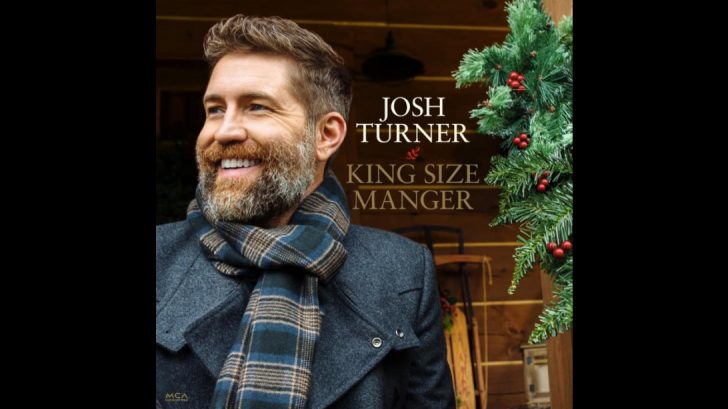 It’s been 18 years since Josh Turner made his country debut with the release of “Long Black Train.” And now he’s gearing up to release his first Christmas album, King Size Manger, accompanied by a 16-city Christmas tour.

Turner’s Christmas album will include plenty of classic holiday tunes as well as four originals, three of which were co-written by the “Your Man” singer. King Size Manger also includes special guest vocals from Grand Ole Opry member and bluegrass queen Rhonda Vincent on “Joy To The World” and Turner’s own wife and children join him for “Have Yourself A Merry Little Christmas.”

Turner announced his new project on Tuesday (August 31) along with a peek at the album cover.

The announcement was followed by a video that shared a track listing for the project:

“Angels We Have Heard On High”
“What He’s Given Me” (featuring Pat McLaughlin)
“King Size Manger”
“Joy To The World” (featuring Rhonda Vincent)
“Soldier’s Gift”
“Have Yourself A Merry Little Christmas” (featuring the Turner Family)
“Go Tell It On The Mountain”
“Mele Kalikimaka My ‘ Ohana” (featuring Jake Shimabukuro and Ho’okena)
“The First Nowell”
“Santa Claus Is Comin’ To Town”
“Silent Night, Holy Night”

Turner told Music Row Magazine that fans may be surprised to hear his renditions of some of the well-known Christmas songs on the album.

“Making a Christmas record can be a mighty daunting task for an artist. There are so many songs to choose from and there’ve been so many versions of those songs throughout history. It can be intimidating to know whether you’ll be able to measure up to what’s already been done and when I get to that point, I step back and remind myself that I have to do what I hear in my heart,” Turner said. “You may be surprised to hear my arrangement on some of these songs that you know so well. We had a lot of fun throwing out all the preconceived notions of what a Christmas record should sound like. In my opinion, it’s about the words and the heart and soul of how a song sounds. You don’t need jingle bells on a song to make it a Christmas song.”

Turner will also embark on his Holiday & The Hits Christmas Tour in November, starting with a stop in Michigan and wrapping at the Ryman Auditorium in Nashville on December 20.