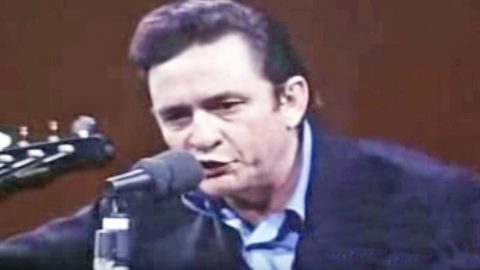 Cash cared so much that he gave countless free prison concerts and has even recorded a few live albums at his shows there.  His live album Johnny Cash At San Quentin wasn’t recorded and released until 1969, but he began performing there a decade earlier.

His first concert at San Quentin Prison was on January 1, 1959. One of the inmates in attendance at this concert was none other than Merle Haggard. Cash’s performance inspired Haggard to turn his life around and pursue a country music career.

In an interview with Men’s Journal, Haggard told the story of how Cash found out he was one of those inmates.

“One time we were doing a television show and he was talking about playing San Quentin in 1959, and I said, ‘You didn’t have a voice that day, Cash!’ And he turned around like, ‘How the hell would you know?’ And I said, ‘I was there.’ It blew him backwards.”

For Haggard, Cash’s appearance was life-changing, but not everyone saw it that way. Even a decade after he started playing these concerts, they remained controversial.

Before he started this particular performance he asked, “Any of the guards are still speakin’ to me, can I have a glass of water?” After receiving a small cup of water, Cash began singing his hit song “San Quentin.” The inmates went crazy for the line “San Quentin, may you rot and burn in hell“.

The video is combined with other clips of the inmates walking in lines and the guards walking around with guns. Watch the amazing performance below.