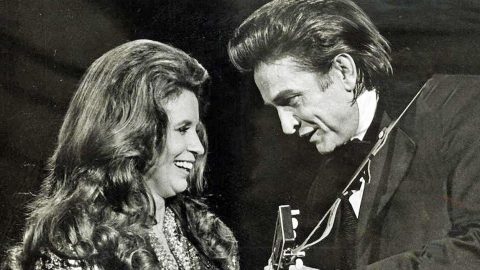 Just a year before one of country’s most iconic couples, Johnny Cash and June Carter were married, the two released a song that would quickly became a huge hit.

Johnny and June Carter Cash recorded three full albums together, but they worked together for nearly 40 years. Which of their duets is your favorite?http://ow.ly/hpD650ldXPH

“Jackson” was originally written and recorded by Billy Edd Wheeler and Jerry Leiber. By 1967, two more versions of the song surfaced, including Johnny and June’s duet. The other was released by Nancy Sinatra and Lee Hazlewood.

The song became a huge hit for the Johnny and June, as fans could relate to the song’s honest lyrics. “Jackson” peaked at number two on the Billboard Country Singles chart and won Johnny and June a Grammy Award in 1968 for Best Country & Western Performance Duet, Trio or Group.

In the video below, Johnny and June perform live for the audience on the Ralph Emery Show in 1967. Although the two were not officially a couple, the chemistry between them was undeniable! The relationship came with complications but the two couldn’t stay apart…and we can see why. It’s like the performance was a glimpse of what was to come.

Although the song has been sung by others through the years, no one sings it like this duo! Check out the stunning performance below.