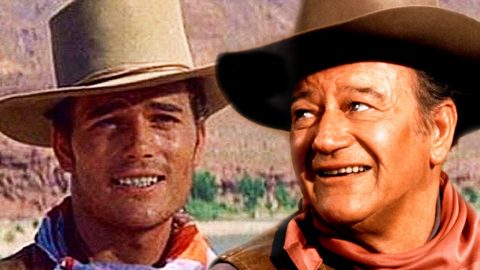 In this touching tribute to his father, Patrick Wayne explains how deeply impressed he was at his father’s ability to portray a role, and portray it well. Patrick opens up about his father, John Wayne, and explains some of his favorite western movies and roles his father starred in.

"I've got a touch of hangover, bureaucrat. Don't push me." Who is feeling like GW McLintock the day after the Superbowl? pic.twitter.com/xt6ItuefPn

John Wayne is and was a legend, and it’s no wonder why! He is considered an American icon and starred in more than 170 motion pictures in a career that spanned over a whopping 50 years.

Below is a video that features some of The Duke’s most memorable quotes, from nearly a dozen legendary, western films. Patrick actually appeared in ten of his father’s films, including The Searchers and Big Jake.

"If you EVER call me Daddy again, I'll finish this fight." Big Jake was the last of 10 films John Wayne starred in with his son Patrick Wayne ? What's your favorite movie the two made together? pic.twitter.com/L1JdJitW0O

Check out this video of Patrick detailing some of his father’s best roles. You won’t be disappointed.