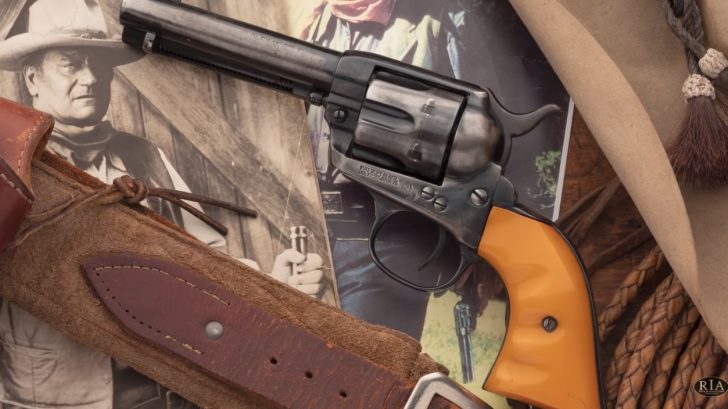 Rock Island Auction Company (RIAC) has just announced that the revolver owned by John Wayne and was used in iconic American western films like True Grit, just sold for half a million dollars.

The all-back Colt Single Action Army revolver with a yellow handle made history after being featured in not just True Grit, but also in Rooster Cogburn and The Cowboys.

The auction house informed the public that the gun was going to be up for sale and it piqued the interest of many buyers. RIAC started off the bidding at a significantly lower amount but with many buyers wanting the gun, the price quickly shot up in the hundreds of thousands.

The Colt six-gun ended up being sold for a whopping $517,500. It came with John Wayne’s holster rig and several documents authenticating it, as well as a 1972 copy of “Life” Magazine with Wayne on the cover wearing both the rig and gun.

“The collectibles market has been experiencing tremendous growth in several genres,” RIAC President Kevin Hogan said. “When you combine two of those genres, Hollywood memorabilia and collector firearms, it can really invite some heated competition. We’re very pleased for our consignor and thrilled that our buyers trust us to authenticate these fantastic items.”

In addition to the revolver being sold during the three day auction, over 7,000 other collector firearms, military artifacts, accessories, and artwork were sold. RIAC said that the auction collected over $8 million.

“Rock Island Auction Company is the world’s #1 auction company for firearms, bladed weapons and militaria. Founded in 1993 by its current CEO Patrick Hogan, RIAC continues to lead the industry with record sales numbers and their extensive and beautiful marketing efforts,” they wrote on their website.

Watch Video Of The The Gun Being Auctioned Below