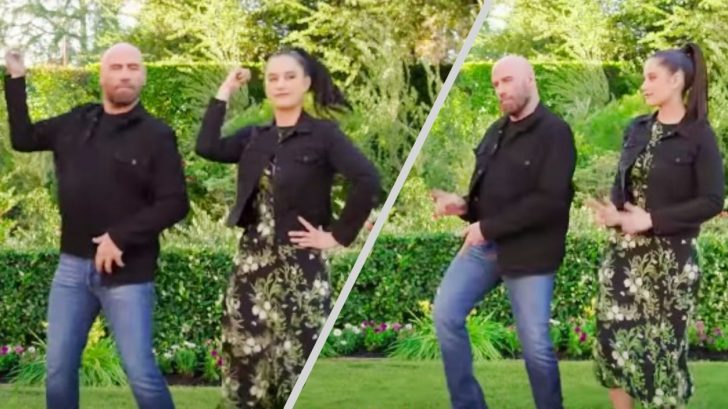 John Travolta and his 20-year-old daughter Ella play a big part in a Super Bowl commercial, and people love it!

Scotts & Miracle-Gro put together a star-studded advertisement to air in coordination with “The Big Game.” In addition to John and Ella, some other celebrities who appear in the 45-second commercial include NASCAR driver Kurt Busch, Martha Stewart, and The Office actor Leslie David Baker.

The clip was released online five days before the Super Bowl.

John and Ella are first seen at the 27-second mark in the ad. Ella tried to guide her father as he set a phone up on a selfie stick, telling him, “Dad, it’s the red one… the other red one.”

After they got everything set up, John and Ella broke out into the famous “Hand Jive” dance from Grease. They specifically recreated the part where John’s character, Danny, danced with his love interest, Sandy (played by Olivia Newton-John).

But the father-daughter duo did modernize the “Hand Jive” dance a bit. For starters, they performed the moves to the tune of Surfaces’ hit “Sunday Best,” instead of the “Born to Hand Jive” song.

The pair also updated their dance by including a few new moves in their routine.

After that, the ad cut to Martha Stewart, who remarked that John’s “still got it” after all these years. The commercial ends with one final clip of John dancing, shot in a way that makes it appear as though it was filmed on the phone he set up earlier.

Tune in to the video below to watch John and Ella strut their stuff in this Super Bowl ad. It’s sure to put a smile on your face!