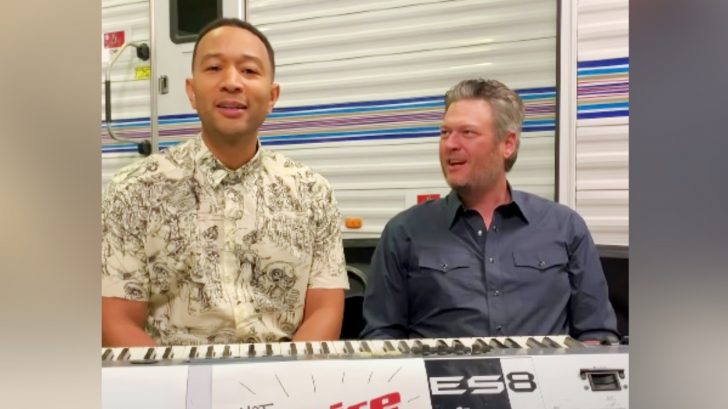 Blake Shelton recently announced he’s leaving The Voice at the end of its next season (Season 23) in 2023. The news came as a shock to fans, since Shelton is the only coach who has been with the show since its inception.

Shelton said he’s “been wrestling” with the decision to leave The Voice “for a while.” But he feels like now is the right time to hand over his red chair to someone else.

“This show has changed my life in every way for the better and it will always feel like home to me,” Shelton said in his announcement post. “It’s been a h— of a ride over these 12 years of chair turns…”

Shelton’s wife, Gwen Stefani, has served as a Voice coach alongside him for several seasons. They’re currently coaching Season 22 together.

She commented on his announcement, saying, “i am so proud of you and so blessed to have found u. your talent brings joy to the hearts of so many people and i am so lucky to be part of ur life’s journey.”

Another one of Shelton’s fellow coaches, John Legend, also wished him well. Legend tweeted, “You will be missed, brother! What an incredible run!”

Shelton responded, saying, “It’s been an absolute blast my friend.”

It’s been an absolute blast my friend. https://t.co/eHFPRB1hsy

Legend has been a coach on The Voice since Season 16. So he and Shelton have spent a lot of time together over the years.

The “All of Me” singer spoke in more detail about Shelton’s choice to leave The Voice during an interview with ET. He said:

“Well, you know, he’s been doing the show for 22 seasons, it’ll be 23 when he’s done, and you can’t do something forever. We’re gonna miss him though. He’s been the heart and soul and anchor of the show for a long time, and he’s a friend of mine, and I really enjoy working with him…We’re all gonna miss him.”

Legend is stepping away from The Voice too, though he isn’t done with the show for good.

“My family’s growing, I have a new album out, I’m gonna do a little bit of touring, and so it’s probably better that I take a break…but I’ll be back on The Voice, just not this coming season,” he said.

Stefani is also taking a break from the show and new coach Camila Cabello will not be returning for Season 23 either. So Shelton will coach his final season alongside returning coach Kelly Clarkson and newcomers Niall Horan and Chance the Rapper.

We’ll sure miss seeing Shelton and Legend together on The Voice. Head to the video below to watch them hang out on set during one of the past seasons.