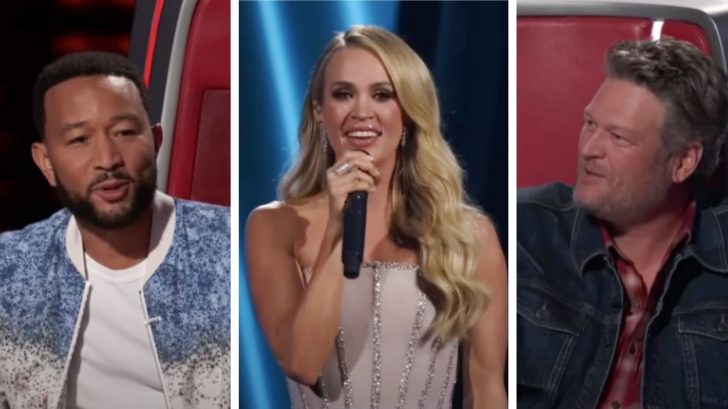 Blake Shelton plans to leave The Voice at the end of Season 23 next year. There’s a lot of talk about who will be his replacement. Shelton has served as the show’s permanent “country” coach, so it makes sense to have another country artist take his place.

Shelton’s fellow coach John Legend agrees with that sentiment. Taking things one step further, Legend already has a specific country artist in mind who could take Shelton’s place on The Voice.

“Well, I think it should be someone in country. We have never had another country coach before because it has only been Blake. So, you know, I could see Carrie [Underwood] doing it. She’s in the NBC family. She sings on our Sunday night broadcast. She could be good! Just an idea, Carrie. But we’ll see what The Voice has in store.”

The Sunday night broadcast Legend is speaking about is Sunday Night Football. Underwood has performed the theme for SNF for ten years.

Underwood would also be well-suited for the job since she has her own experience on a singing competition show. Like frequent Voice coach Kelly Clarkson, Underwood is an American Idol winner. She could draw on her personal experience to help contestants on The Voice.

If Underwood does end up on The Voice as a coach, it won’t be her first time on the show. She previously joined Legend to perform their song “Hallelujah” during the 2021 finale. Watch that performance below.

Time will tell who will take Shelton’s place on The Voice. But since he’s not leaving until next year, it’ll likely be a while before we know who his replacement will be.