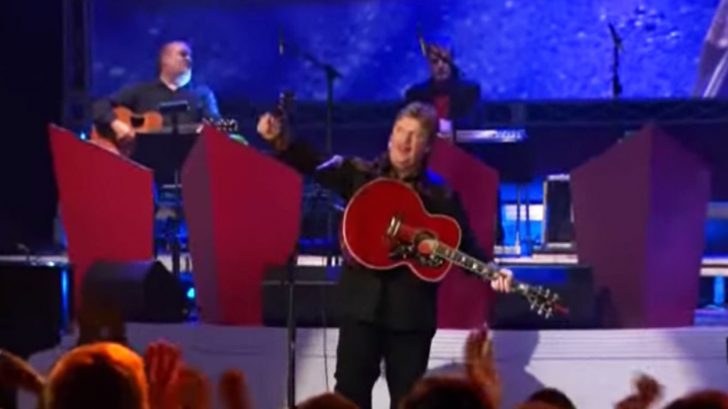 The 50s were a riveting time for rockin’ rhythms. One country music legend showed us just that with his release of “White Lightning.” American country music artist, George Jones went on to make this the first number-one single of his career. Since its release, the tune has been covered by numerous other stars! From Waylon Jennings to Hank Williams Jr. to the most recent, Joe Diffie.

Joe Diffie is an American country music singer best known for some of his 90’s hit singles such as “Home.” Between the 90s and the early 2000s, Diffie’s rise to fame took off. The singer had 35 singles that made the Billboard Hot Country Songs Chart and even won Male Vocalist of the Year in 1990. Aside from his time behind the mic, he also has co-written for several other country stars such as Tim McGraw, Holly Dunn, and George Jones.

At the George Jones and Friends 50th Anniversary Tribute Concert in 2007, Diffie gave the crowd a powerful performance of the Jones classic. With a full band behind him and his guitar in hand, the singer confidently took control of the stage. Not long after the first verse, the crowd was already standing and dancing along. Claps and smiles filled across the venue as Diffie stunned the audience with his onstage presence. The rockin’ singer’s tribute to Jones keeps his spirit alive in the country music world.

Check out the unbeatable performance below!