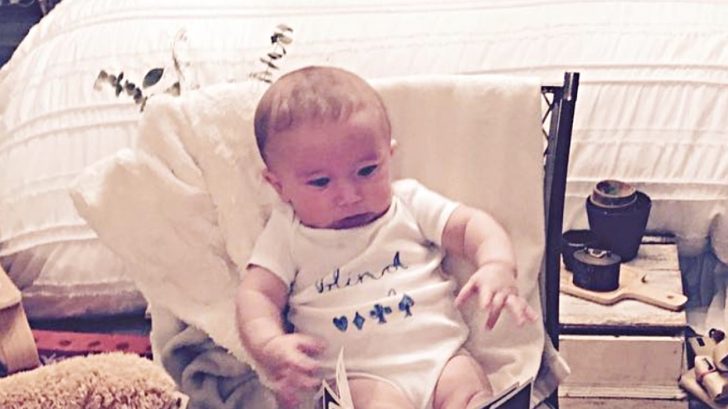 When Joanna Gaines gave birth to Baby Crew in June of 2018, everyone was excited to see the little nugget grow. Since then, he’s stolen our hearts with all the adorable pictures his mom posts to social media. Now, he’s back at it and this time we get to see what his new favorite game is…

Baby Crew was an unexpected surprise from the start. At 40, Joanna didn’t think she would be having another baby but was nonetheless excited to be a mother again! Crew came two and a half weeks early and since then, his family just can’t get enough of the sweet boy.

Crew has slowly shown off some of his favorite things to do. And as a baby, he’s already done more than most. Crew joined his parents to watch his first football game.

He’s even helped them out with their business by working in “guest services.” Something tells us this cute little button is going to run his own company one day…

Thank you for calling @magnolia, how can I help you? #GuestServices

They Grow Up So Fast

But Joanna Gaines’ December 2018 picture of Crew goes to show just how fast they really do grow up. Surrounded by some furry friends, Crew has on a great poker face while he looks at his playing hand.

This might be my favorite thing ever. (Photo and everything else by Ella Gaines) #♠️ #blindnil

It turns out, Crew got a little help learning the ropes from his big sister, Ella. Joanna captioned the picture, “This might be my favorite thing ever. Photo and everything else by Ella Gaines.” It looks like Crew’s older siblings are having a great time with him!

As for the rest of us, we are just excited to see Crew grow up into such a loving family. Check out his appearance on the Today Show below and let us know what you think in the comments.