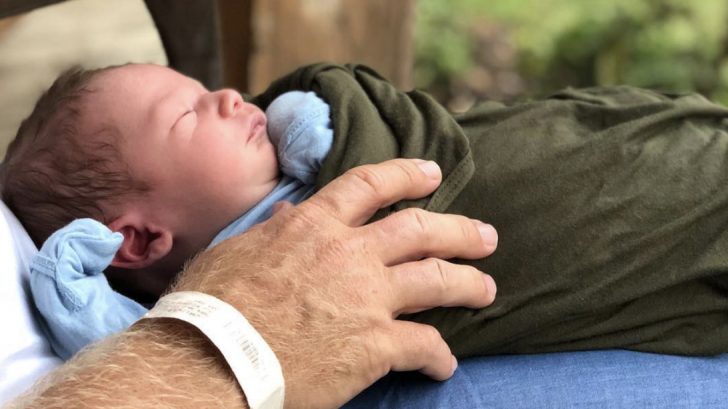 Chip and Joanna Gaines’ new baby, Crew, is almost two weeks old and has already amassed a huge fan club. Thanks to his famous folks and their millions of social media followers, little Crew is perhaps the most followed baby on the internet.

Crew was an unplanned surprise for the Gaines’ who announced that they were expecting just weeks after walking away from their wildly popular HGTV show Fixer Upper.

“I had been feeling a little emotional and crazy and thought, ‘Wow, this isn’t me,’” Joanna told PEOPLE. “Then all of a sudden I realized, ‘Hey, I remember this.’ When I saw the results of the test, my jaw dropped.”

With all the excitement surrounding baby Gaines’ arrival, one would think that he was their first child, but he joined a home already bustling with children. Chip and Joanna are also parents to Drake (13), Ella (11), Duke (10), and Emmie (8), all of whom seemed thrilled to welcome a new baby brother.

The proud new parents have shared numerous photos and videos since Crew’s arrival, but the latest photo may be one of our favorites. Joanna took to Instagram Thursday night (July 5) to share a picture of Chip holding a swaddled and sleeping Crew. On Chip’s wrist is the hospital band that he wore for his son’s birth, a sign that Chip is all about savoring every moment with his newborn. “Chip started a tradition with Drake where he wore the hospital bracelet until it fell off… looks like the tradition lives on. #5,” Joanna wrote.

The photo is also the clearest close-up that the Gaines’ have shared of little Crew. We think you’ll agree that he looks just like his famous momma. Check it out below and let us know what you think. Did you have any special traditions that you shared when your children were born?

Chip started a tradition with Drake where he wore the hospital bracelet until it fell off… looks like the tradition lives on. #5