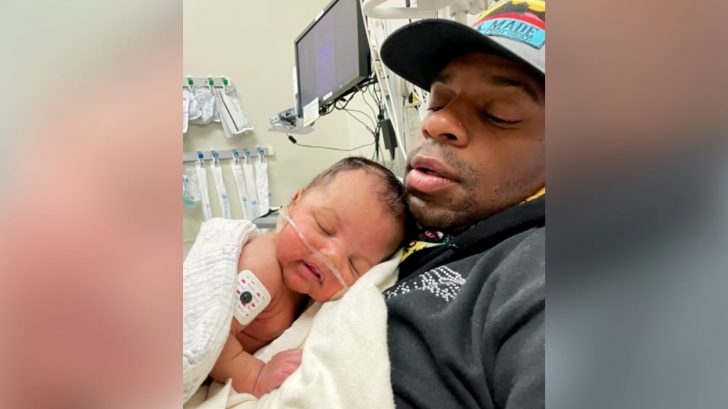 Jimmie Allen and his wife, Alexis, welcomed their second child on October 16. Alexis gave birth to a baby girl, and she and Jimmie named her Zara James Allen.

The Allens also share a one-year-old daughter named Naomi Bettie. Jimmie has a seven-year-old son, Aadyn, from a previous relationship.

Since Zara was born, Jimmie finished his run on Dancing with the Stars, won a CMA Award, and performed during the Macy’s Thanksgiving Day Parade. It goes without saying that the first few weeks of Zara’s life have been eventful…but not entirely in a good way.

On November 21, Alexis shared on her Instagram Story that both Zara and Naomi were ill. Then on November 22, she shared an update on Zara in particular. As an RN, Alexis was frustrated that Zara was being turned away by doctors after “10 min in and outs.”

“Turned away by hospital yesterday AM Ambulance at 2AM,” Alexis said. “Basically if your child isn’t blue at the lips they will not have answers for you. That’s been my last 24 hours.”

Jimmie also spoke about how Zara was sent home by the doctors. He said Zara later “lost color [and] stopped breathing,” so she was rushed to the hospital. Three EMTs saved her life.

Attention Doctors , if the parent of your one month old patient tells you the child having a hard time breathing and the only thing your lazy self wants to do is check heart heart and temperature find another career. Your job is to save lives so do it.

now thanks to the lazy doctors at a hospital in TN that just sent our daughter home, our daughter Zara lost color stopped breathing and is being rushed to another hospital. Thanks to the amazing EMT team that brought back Zara’s color she can breath again. Gonna be a rough night.

On Saturday (November 27) Alexis shared a lengthy update on Zara’s condition. She explained how everything started, saying:

“On Tuesday night I was traveling on the tour bus from Nash to be closer to family knowing that Jimmie had a busy week with work. I wanted to be closer to him and have that support. Zara had been resting the majority of the ride but around 10pm she woke up with a coughing fit for well over 10 mins. Knowing this is something we went through before, I decide to turn the shower on and let the steam help open her airways up a bit. Tried suctioning. Chest rubs. Nothing seemed to work. At 10:30 Zara was unresponsive in my arms and turning color as we frantically ask our drivers to pull over and call 911. The longest 15 minutes of my life. My baby was so so tired her muscles had given up on her. I did everything under the sun to keep her awake and thank god it seemed to work. She was soon in the ambulance with oxygen and finally started to regain her color.“

Alexis thanked the EMTs who saved her daughter’s life and thanked all the healthcare professionals who cared for her in the hospital. She also took the time to thank her followers for their support.

Her update came alongside a series of photos from Zara’s time in the hospital.

After a five-day stay in the hospital, six-week-old Zara finally got to come home on Sunday (November 28). Alexis posted this happy news on her Instagram Story, writing, “We’re going home” along with a white heart emoji.

We’re so relieved to hear that Zara was finally feeling well enough to come home from the hospital. We’ll continue praying for her recovery!