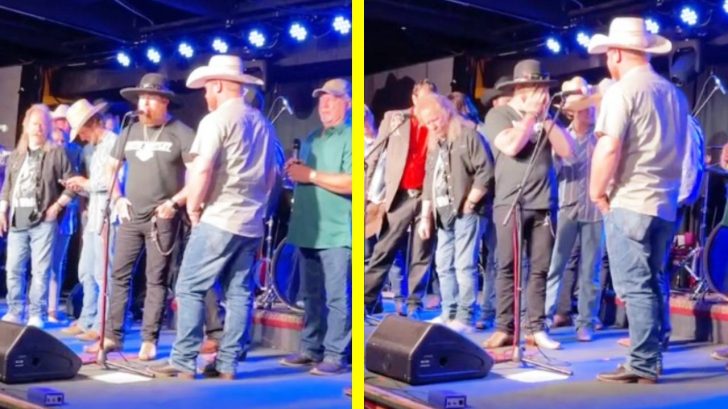 Singing his father’s famous country song along with several of his friends, Jesse Keith Whitley entertained a crowd of fans at The Nashville Palace on Friday (June 25). The Nashville Palace hosted a Keith Whitley Tribute, which benefitted “singer/songwriter, musician and producer Buddy Hyatt, who was diagnosed with throat cancer recently and has been undergoing very costly treatments,” according to an Instagram post.

Jesse Keith and his friends sang his dad’s song “Kentucky Bluebird,” which was included on a compilation album of the same name. The album was Whitley’s first posthumous release and had four previously released songs, re-orchestrated demos, and other previously unreleased songs, as well as snippets from live performances that took place before his professional music career.

Introducing the song, Jesse Keith said, “We’ve got one song left for you guys and if you know it, sing along. This is gonna be a group effort. I hope y’all enjoy it.”

After Jesse sang part of the first verse, he pushed the mic to his buddy and put his face in his hands. The musicians on his right embraced him with a hug before he walked to the back of the stage. It’s been over 30 years since Whitley passed away, but clearly, singing his music makes his son emotional.

After viewing a video of the performance, one person wrote, “Your dad is smiling down on you now saying ‘That’s my boy.'”

Watch Jesse Keith and friends sing “Kentucky Bluebird” in the video below.