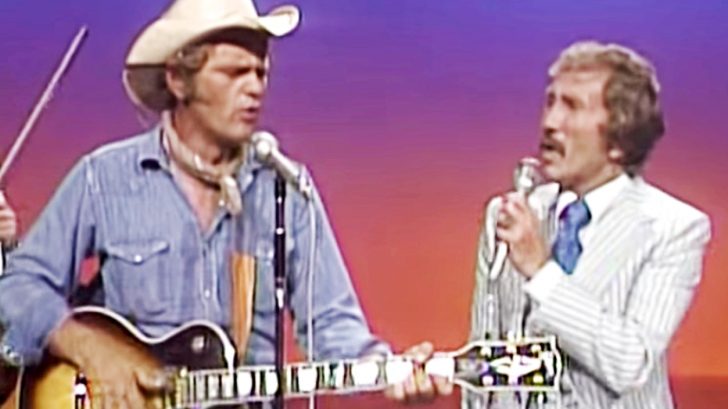 When you take two country music heavyweights like Jerry Reed and Marty Robbins and put them together to sing – you know it is going to be one heck of a performance. Still, the iconic singers decided to spice up their act with a very special surprise for their 1978 audience that they will never forget.

Each artist was talented in their own right. Robbins was a singer, actor, and even a racing driver. Reed was a singer, veteran, and actor. So when the two men came together on Marty Robbins Spotlight variety show, they decided to take turns singing these timeless songs that helped shape country music as a whole. The results? Amazing.

“When My Blue Moon Turns To Gold Again.”

The fellas start out singing “When My Blue Moon Turns To Gold Again.” This traditional country song was written in 1941 by Wiley Walker and Gene Sullivan. Since then, it has been covered by artists like Tex Morton, Merle Haggard and even the king of Rock n’ Roll – Elvis Presley!

Reed gave “When My Blue Moon Turns Gold Again” a southern rock twist as he picked away on his guitar and howled the lyrics into the microphone.

“Take These Chains From My Heart”

A Hank Williams‘ classic, “Take These Chains From My Heart” was recorded during his final recording session in September 1952. After his passing a year later on New Years, the song shot to #1 and became his final chart-topping hit for MGM Records. It was only right for Robbins and Reed to include this song in their star-studded list.

The boys honored Hank by staying true to the patient strumming and enchanting melody of his final hit. This part of their performance is sure to have you trembling as you remember The Hillbilly Shakespeare.

George Jones released this honky-tonk tune back in 1956. The Possum stuck it to the mainstream by showing off his blue-collar pride and it became an instant standard. True to the song’s meaning, it never became a chart-topping hit but his fans loved it anyway and it gained popularity among the masses.

The second Reed started playing “I’m Ragged But I’m Right” – Robbins had a huge grin come across his face and the crowd went wild.

“Please Don’t Let Me Love You”

As it came back to Robbins’ turn, he chose another Hank Williams classic. Released on the B-side of Faded Love and Winter Roses, “Please Don’t Let Me Love You” showed off Williams’ lifting falsetto. While Williams was not alive when the song was released and became his last solo hit, we’re sure he would have loved seeing the next generation of artists pay tribute with this smooth, slow-burning ballad.

Which is exactly what Robbins and Reed did. Robbins even took on the hard-to-hit howling notes that Williams was known for.

For their closing act, Reed brought in a fiddle player and starts stomping out a mix of the folk classic “Old Dan Tucker” mashed up with a Bill Monroe standard. While the origins of “Old Dan Tucker” are fairly obscure – it is widely known as an 1800s American folklore tune that holds a special place in true country music fans’ hearts. Reed starts off singing the legendary song to the tune of “Uncle Pen” by Bill Monroe and switches over to the chorus as Robbins joins in.

The entire crowd was stomping and clapping along to the boys playing the upbeat tune on stage. There was such great energy in the room and you could tell the legendary musicians were feeding off the audience’s excitement. This was definitely a once-in-a-lifetime experience they will never forget!

To take on all of the time-honored hits listed above, you’d have to be incredibly talented and confident. Which is why only Reed and Robbins would be crazy enough to do so. The two gifted men showed just how talented they truly were by singing a medley of classic country songs that will take you down memory lane…

You can watch their full performance below and let us know what song was your favorite in the comments!