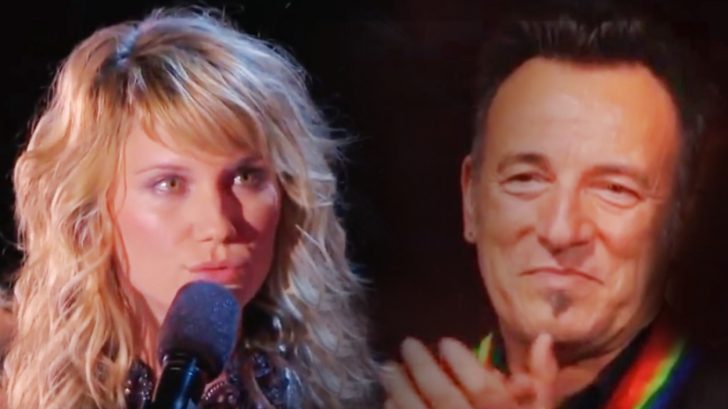 Bruce Springsteen is a man of many talents and his passion shined through in all his songs, so to cover one – you have to be able to show just as much passion and desire. So when Sugarland’s Jennifer Nettles decided to take on the icon’s song, she knew she had to give an intensely heated performance of his hit, “I’m on Fire.”

Springsteen wrote and recorded the 1980s ballad for his popular album, Born in the U.S.A. and it became an instant success. The song highlights a romantic tension that is built up between two lovers who have yet to make the first move.

His music video adds an artistic interpretation of the lyrics with images of a blue-collar mechanic who works on the Ford Thunderbird of a wealthy woman.

While Springsteen highlighted the tension between a mechanic and his client, Nettles brings a whole different kind of tension to her performance of “I’m on Fire.” Her entire presence on stage while singing the slow-burning ballad is electrifying!

During an event honoring Bruce Springsteen at the Kennedy Center, Nettles took the stage with Ben Harper for one intense, steamy act. While Nettles is country through-and-through, it was nice to see her alongside the bluesy, eclectic artist. It definitely brought a whole new sort of energy and life to the song.

Surrounded by celebrities, former presidents and Springsteen himself – Nettles and Harper gave a once-in-a-lifetime performance. Springsteen can be seen looking pleasantly surprised the entire time as he was honored for all he has done for the music industry and the community.

As you watch, you’ll notice that Nettles and Harper were channeling such deep emotions while covering the sultry song. They’re practically unable to take their eyes off of each other! You can watch the full video below and let us know what you think about the duet in the comments. Did they do Springsteen justice?