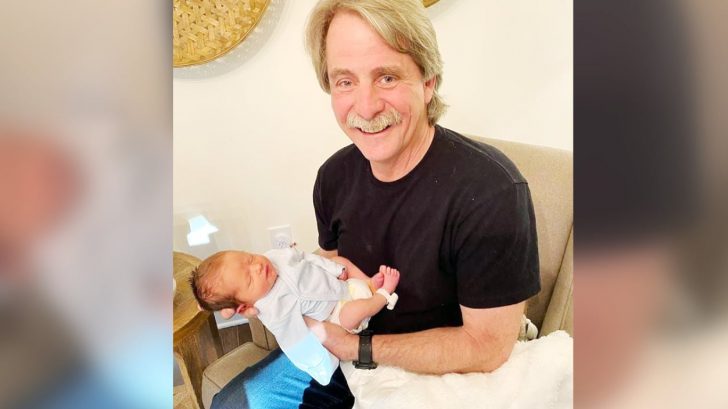 Jeff Foxworthy is a comedian, actor, author, producer, game show host, and more. Now, he can also add the title of “grandpa” to his resume!

Back in 2017, Jeff told Atlanta Parent that he believes being a parent is “the most important job you have in life.” He and his wife, Pamela, share two daughters: Jordan and Julianne, nicknamed “Jules.”

Atlanta Parent asked Jeff if he was “one of those dads who always wanted a son.” He said in his younger years, he would have thought so, but he now realizes that being a girl dad is the perfect role for him.

“The dad and daughter bond is just a special thing,” he said. “Before the girls were born, I would have said I always wanted to have boys because I like to bow hunt. The good Lord knew what I needed more.”

Well Jeff finally got his hunting (and fishing) buddy, because he now has a newborn grandson!

Jeff shared the happy news on March 15. He posted a picture of him holding his first grandchild, and of course, he couldn’t keep himself from cracking a joke.

“With the birth of my first grandchild, everybody else on the planet dropped one spot in my rankings this week,” he said.

The bouncing baby boy belongs to Jules and her husband Brendan Corely. Jules’ Instagram is private, but her bio contains a baby emoji and a blue heart next to the name “Ronan.” So it seems safe to assume that the newest member of the Foxworthy family is named Ronan!

Jeff also announced his grandson’s birth on Facebook with a different message.

You can see Jeff’s Facebook announcement about his grandson’s birth below.

Who knows, maybe one day Jeff’s grandson will go on to become a comedian like him! Check out the video below to watch one of Jeff’s past comedic bits about what it’s like raising kids and how things have changed over the years.

Congratulations to Jeff and his family on their new addition!