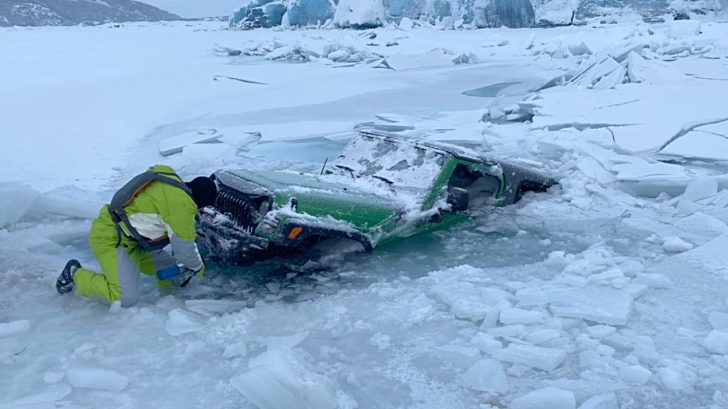 28-year-old Josh Tills drove out to Knik Glacier with his girlfriend on January 26th, 2020 to have a little fun off-roading with a community of people who gathered at the popular winter destination. Their mission: to drive their vehicles on the icy lake and mountainside.

Josh had been off-roading for six years and after visiting Alaska when he was in the military he fell in love with the state and decided to move to Anchorage in October. One of his favorite things to do was offroad and when Josh arrived at the glacier there were about 30-40 vehicles out on the frozen lake driving around.

Excited, he and his girlfriend drove out onto the ice and started having their own fun. Unfortunately, they didn’t know not to drive too close to glaciers because they often move and weaken the ice around them. Josh ended up driving a little too close and that’s when he heard a loud cracking noise.

Josh told to Anchorage Daily News, “I’ve heard lakes shift and crack before, so I was like ‘Oh, God’ — it’s always scary, but I wasn’t too concerned. But then we got another couple feet and then the Jeep went through.”

Water started pouring through his back windows and where he was in the water was about 600 feet deep. He yelled to his girlfriend to climb out of the vehicle and get the attention of the other jeeps for help. Meanwhile, Josh made his own way out of the 2005 Jeep Wrangler Unlimited that was now about halfway submerged in the water.

The ice was about 4 inches deep where he was. The level of thickness that ice is considered safe to drive on is 12-15 inches. Ice thickness varies though in different spots and the ice was 2 feet thick in spots close to where his Jeep fell in.

There was nothing they could do about it so they left the Jeep there overnight until help could arrive. Fortunately, it was still there in the morning because luckily, it was sitting on a glacier that was hidden under the water. His insurance company paid for divers and a helicopter team to investigate the situation to see if it was possible to save it.

Due to bad weather, the helicopter pilot wasn’t able to assist in the operation, however, divers prepared the vehicle for lifting and the spectators who gathered to watch decided to help. Six people with Jeeps strapped their vehicles to Josh’s Jeep and began to pull it out.

Slowly they tugged on Josh’s Jeep and within a matter of seconds, they were able to pull it out of its sunken place. After that, a tow truck took it to a local mechanics garage to let it dry out for the night. The next day, Josh and a few of the guys inspected his Jeep to see how bad the damages might be.

Josh says he just feels lucky that he and his Jeep survived and grateful to have made new friends who were very supportive during the whole situation. After hours of working on the Jeep, the lights finally came back on and it appears it’s going to make a full recovery. Josh says he’s definitely going to get back out on the ice but not get as close to the glacier this time.