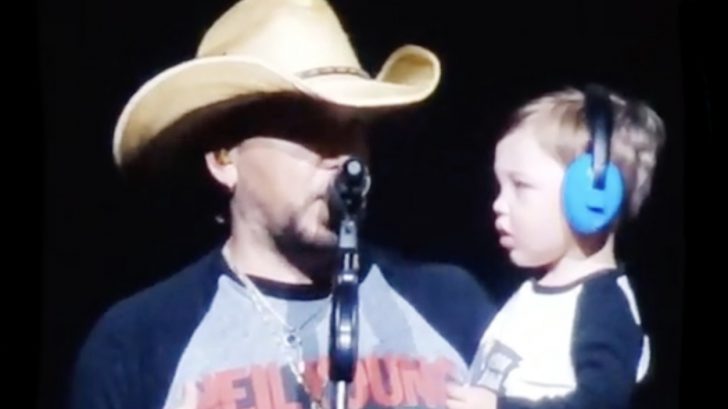 On December 1, 2017, Jason Aldean and his wife Brittany welcomed their first child together, a son named Memphis Aldean Williams.

He shared the happy news on social media, writing, “So blessed today to see my little man come into the world. In a year that has been a rollercoaster ride, this is what its all about. I cant wait to see what life has in store for this kid. Memphis Aldean… 9lb 5 oz.”

So blessed today to see my little man come into the world. In a year that has been a rollercoaster ride, this is what…

Since Jason is a touring musician and family is extremely important to him, Memphis has been on tour with his country-singing dad since he was 5 months old, although he has never seen a show because Jason goes on well past his bedtime.

This year, Jason is touring with two small children, with the addition of his baby girl Navy Rome – and for the first time, Memphis was able to see his dad perform!

“This angel saw his first show tonight (well, partially ?) and he was mesmerized,” she wrote.

This angel saw his first show tonight (well, partially ?) and he was mesmerized?⭐️

Not only did Memphis watch his dad perform for the first time, he also made his stage debut! Jason brought him out, with protective headphones, and introduced him to the Oklahoma crowd at the Choctaw Grand Theater.

“This is Memphis, everybody!” Jason said as the crowd cheered for the 17-month-old.

In the fan posted video, you can see Memphis trying to say something to his dad, but once Jason puts the mic to Memphis’s mouth, he gets quiet.

He tries to get Memphis to wave at the crowd, but no luck! Jason realized Memphis was ready for bed so he set him down to walk over to Brittany on the side of the stage, but not before giving Memphis a kiss, which garnered a loud, “Awww” from the crowd.

Watch Memphis’ adorable stage debut in the video below.