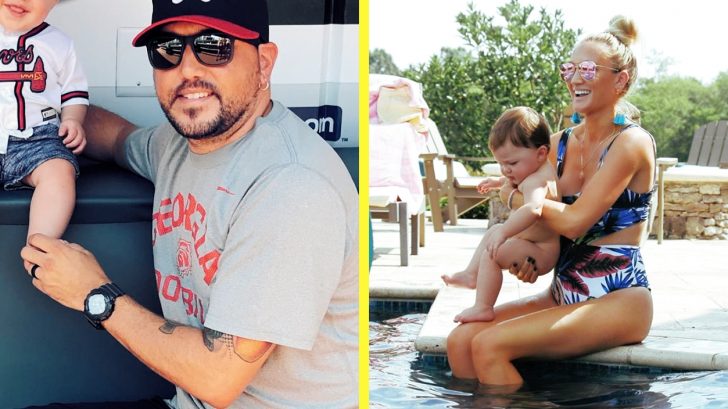 This bouncing baby boy is growing up so fast – and it’s clear which parent he looks like the most!

Country music superstar Jason Aldean and his beautiful wife Brittany are currently expecting their second child together, but their first little one – little Memphis Aldean – is clearly taking after his father!

PEORIA, IL!!! Come hang out with me this Friday, May 11th, at The grand opening of The RoomPlace at Northwoods Mall from 11-1pm! We are giving away two tickets to Jason’s show during that time… (but you have to be present to win!) To enter text “WINTIX” (all one word) to 90407 ?? GOOD LUCK and can’t wait to meet y’all! ???

The Aldeans welcomed Memphis into the world on December 1st, 2017 and boy is he growing up! Ever since they were blessed with this bundle of joy, they’ve shared a stunning stream of photos and videos with fans – and Jason even opened up about becoming a father again.

Speaking about becoming a father again, Aldean revealed to Bobby Bones that he is expecting the unexpected, “I think it probably helps because I kind of know what to expect, but also I think every kid’s different, you know? And it’s been a long time since I’ve had a baby at home. I think anytime a new baby is in your house, it’s tough, just trying to figure them out, their personalities and I forgot how much they eat! It’s all the time, man, like every two hours!”

Taking to her favorite social media site, Instagram, Brittany Aldean shared one recent photo of little Memphis that had fans glowing with excitement – and exclaiming how much he looks like his dad!

This little tyke has grown like a weed over the last few months, and he’s looked like dad Jason in a few pics, but nothing comes close to this new one!

Nothing’s cuter than a baby/bulldog conversation

Sitting squarely on the bathroom floor in just a diaper and hanging on to the curtain, little Memphis beamed at the camera, flashing some of his beautiful blue eyes!

“The crazier the hair the better if you ask me,” Brittany writes alongside the photo commenting on his wild hair-do.

Fans blew up the comment section expressing exactly how much he looks like Jason – and we couldn’t agree more!

Check out the new photo below and watch Jason Aldean and Miranda Lambert’s duet “Drowns The Whiskey,” too.

The crazier the hair the better if you ask me☺️