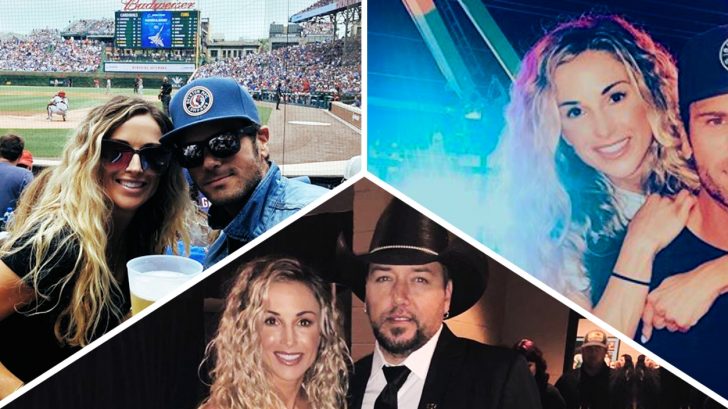 Having a country singer for a brother is one thing, but this blonde bombshell is dating one, too!

Not too long ago, country megastar Jason Aldean‘s little sister went public with her relationship with a fellow country music singer and on-air radio personality – and fans were losing their mind!

Aldean’s younger sister, Kasi Williams, is a big part of his life – so, naturally, he is very protective of her and outwardly admits there are some folks in Nashville he’d keep her away from.

“I’ll be honest, there’s a lot of people in Nashville I would be completely against you dating,” Aldean told Williams of her newfound boyfriend. “But I don’t have anything bad to say about [him].”

Last night was another one for the books ✅ ✅ @suntrustpark @jasonaldean

Williams who just recently confirmed her relationship with country music singer and radio host, Chuck Wicks, but they have shared many photos on social media over the last couple of months – however, none has been as steamy as this recent one!

Chicago always makes me happy…but it’s not just being near Wrigley and the Watertower, it is almost always because of the friends around me. #Chi

It’s clear that Williams and Wicks are enjoying their time together – and obviously, Aldean thinks his little sister is in good company because both Wicks and Aldean have known each other for a good amount of time!

During a recent outing for the new couple, Wicks shared a photo of himself with Williams at a football game in Nashville’s Nissan Stadium – and boy was it a steamy one!

Snuggled up real close to Williams, she has her arm draped around his neck and is whispering sweet nothings into his ear as he puts both hands on her legs and leans in to listen.

“If you only knew what she was saying to me…” he coyly captioned the photo.

If you only knew what she was saying to me.. ?❤️

All of the folks commenting were congratulating him and expressing how happy they are for him – and we couldn’t agree more!